We are blessed at the Blueseum to receive digital copies of memorabilia from private collections. Some of these pieces have never seen the light of day for decades but we now get the opportunity to share them with Carlton supporters everywhere. This is the story of a piece of paper that itself tells 22 stories of the Carlton Football Club. There are premierships, best and fairests, captains and even a legend, there are men who gave their heart and soul to the club and men who gave their lives for their country. 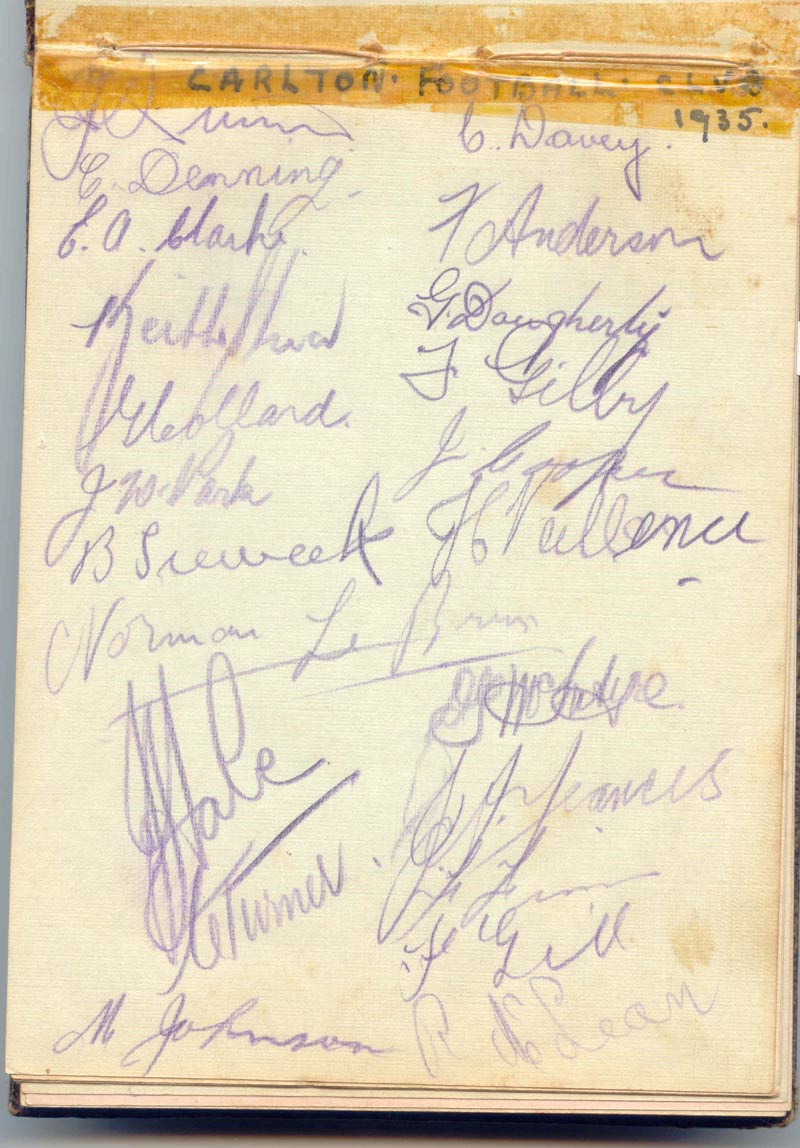 The picture on the right is of an autograph book from 1935 listing the names of 22 Carlton footballers. Even though this page was signed 73 years ago it captures a point in time for our mighty club much like the rings of a tree reveal the vagaries of each season. Twenty two men who represented our club at the highest level adorn this page. This is their story.

Ray Quinn
Ray was a local lad and 1935 turned out to be his last year at the Blues after three seasons and four games. He did go onto premiership success in the VFA with Brunswick in 1938.

Clen Denning
Clen made a stunning debut in 1935 when he kicked six goals in his first game, from his first six kicks. He went on to kick another thirteen goals in six further games for the season. However, 1935 would prove to be his best year and he left the club in 1937 after a total of 18 career games.

Ansell Clarke
By 1935 Ansell Clarke was a into his sixth year of playing for the Blues. He would go on to be best and fairest in 1936 and then Captain of the club in 1937 before moving to St Kilda to end his career. A familiar story.

Keith Shea
Shea was a fine centreman who in 1935 played all bar two games that season as part of an overall career of 91 games for Carlton. He went on to represent both Victoria and Western Australia in representative football and to captain coach Hawthorn after the War.

George Collard
A Sandhurst lad, Collard managed just two games in his debut season for the Blues in 1935. Wearing guernsey 13 he would eke out a career of 18 games over a further three seasons.

Jim Park
Season 1935 was mid career for the eventual 128 game career of Jim Park. From the Carlton recruiting stronghold of Bendigo, Park would go on to become a premiership player for Carlton in 1938 where he kept the dangerous Collingwood full forward Ron Todd quiet. Sadly, in 1943 Park was killed fighting for his country in World War II.

Bernie Treweek
This would turn out to be his last season at the club after two years and six games. Treweek went on to play for Fitzroy until the 1940 season.

Norman Le Brun
Carlton was Le Brun's fourth VFL club and in 1935 at the age of 27 it turned out to be his only season playing for the Blues. Tragically, Norman was killed in action in the jungles of New Guineau during World War II.

Jack Hale
Jack Hale had a productive year in 1935, playing every game, mainly off a half forward flank. Hale progressed to become an important part of the 1938 premiership team and after retirement as a player after 1941 he had a distinguished career as a coach and administrator.

Clete Turner
After a career of 20 games spanning both Geelong and Fitzroy the 26 year old mature age recruit found himself at Carlton in 1935. What seems like a promising first season with the club which included 19 games ended as quickly as it began. The reason for this is unkown.

Maurie "Mocha" Johnson
In 1935 'Mocha' was one of the veterans of the side and this was the second last season of a 10 year career at the Blues. Over 109 games for the Blues Mocha provided fine service as a dashing ruck rover, also captaining the club in 1934.

Charlie Davey
Charlie Davey had a passion for the Blues since he was a child. When this autograph was written Charlie was the captain of the club. A Carlton boy by birth he overcame setbacks to finally get a game for his beloved Blues. Not only did he have an excellent career consisting of 143 games and captaincy he represented the Blues as a committee member for 27 years after his playing career came to an end. In 1994 Charlie was inducted into the Carlton Hall of Fame.

Frank Anderson
In 1935 Frank Anderson was just in the second season of what would turn out to be an 11 year playing career for the Blues. After cementing a place in the backline he would go on to become an important part of the 1938 premiership team. He had the misfortune to finish runner up a total of three times in the club's best and fairest award.

George Dougherty
George Dougherty'sw story is about the one who got away. In 1935 George played just seven games at centre half forward, trying to establish himself in just his second season in the VFL. Sadly for George and as it turns out for Carlton he was released part of the way through the 1936 season to Geelong where he became one of the stars of the competition and acheived premiership glory for Geelong in 1937. The tall forward would end up playing at four clubs for a total of 173 games and 259 goals.

Fred Gilby
After playing in a Carlton reserves premiership in 1926, Fred Gilby would blossom as a 179 game defender for the Blues. Sadly for Gilby his career would end in 1937 just one season before a Carlton senior premiership. During 1935 he would play his 150th game against the Tigers in round 14.

Ron Cooper
In 1935, when signing this page Ron 'Socks' Cooper would not have envisaged the unfortunate events that would await him. Just three years later in the last round of 1938 Ron was suspended for four matches for striking St Kildas Doug Raymont. The penalty meant that Cooper would miss out on playing in the 1938 premiership side and his only chance at premiership glory in an otherwise exciting career of 157 games and 170 goals for the Blues.

Harry Vallence
While some of the stories here have been about missed opportunity the story of Harry Vallance is a story of a near miss. In 1935 'Soapy' was an established star of the competition, he would eventually be recognised as the only pre-war member of Carlton's Team of the Century and pronounced an official Legend of the Club. None of this would have been on Soapy's mind back in 1935 at that stage he was ten years into a playing career that had yeilded not one premiership. By 1937 the brilliant forward was out of form and playing in the Carlton reserves, luckily for Soapy and for Carlton newly arrived coach Brighton Diggins managed to convince Soapy to come back to the big time for one more year after he looked to be headed to Williamstown. In 1938 Soapy produced a magnificent 81 goal season and played his 206th and final game, the ever elusive premiership.

Don McIntyre
Don McIntyre was a raw boned 20 year old in 1935 playing just his first year of VFL. That season he managed just one game against Footscray in round seven. He would endure to become a solid defender over eight seasons, exactly 100 games and a part in the 1938 premiership.

Jim Francis
Jim Francis had served a five year apprenticeship at Hawthorn and when Carlton expressed interest the Mayblooms let Francis go without even asking for a fee. Jim slotted in at centre half back from 1934 and proceeded to earn a premiership, dual best and fairests, captaincy, senior coaching and a place in the Carlton Hall of Fame amongst 162 games. Not bad for a Hawthorn reject.

Frank Finn
When this autograph was given in 1935 Frank Finn's senior career at Carlton was already over. Frank managed to play four games in 1934 for the Blues which were to be his last, he managed to resurrect his career at Footscray where he played three senior games over 1936-37.

Frank Gill
Frank Gill was mid-career in 1935, a star full back he had already represented Carlton as captain in 1933. At this stage he was a 100 game veteran of the club, this run of games would eventually stretch to 205 in 1942 and along the way a premiership in 1938 and best and fairest in 1939 which is an amazing acheivement for a full back.

Rod McLean
Last but not least is the autograph of Rod McLean who played just one game in 1935 as a young up and coming ruckman. Of the twenty two names on this page Rod is the only one who played in two Carlton premierships. He was vice-captain for the Blues in the famous 'bloodbath' grand final of 1945 against the Swans.