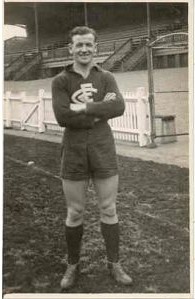 An affable, good natured character, Jack Conley served his country and his football club with dedication and whole-hearted effort. An army reserve volunteer at 18, and a VFL footballer at 24, Jack was first rover in the Blues’ fabled flag side in 1947. He would probably have played in the 1945 Premiership team as well, had he not been absent all that year on military duty.

As a footballer, Conley was your classic late developer. He joined Carlton from the uniquely-named Coburg Sons of Soldiers during the 1941 season, and initially played with the seconds whenever his army service allowed. A tough, durable rover who always knew where the goals were, he was on leave and stationed in Melbourne when Carlton coach Percy Bentley eventually included him in the senior team to play South Melbourne at Princes Park in round 12 of 1944. From that day on, whenever he was fit and available, Jack wore his number 35 guernsey into battle in the senior team for the Blues.

In April 1944, Conley achieved a long-held ambition when his application to transfer from the AIF to the RAAF was approved. The downside was that he missed the entire 1945 season of football after he swapped his army khaki for air force blues and began exploring the mysteries of powered flight. However, when World War II ended in August 1945, Jack was faced with a serious dilemma. As a volunteer, he was entitled to automatic discharge – but this would end his pilot training. On the other hand, to complete his flying course, he was required to sign on again with the RAAF for five years. After some deep deliberation, he decided to return to civvy street, and of course, football again with the Navy Blues. 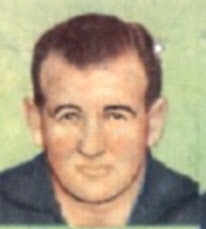 Jack’s comeback season at Carlton in 1946 was a revelation. While the team suffered a Premiership hangover and finished sixth on the ladder, he didn’t miss a match all year. He booted 39 goals, finished runner-up in the club’s Best and Fairest - and by season’s end had formed a powerful combination with ‘Chooka’ Howell and Jack Bennett in the first ruck.

In 1947, this trio was joined in the centre of the ground by WA champion (and debut captain) Ern Henfry. With a rock-solid defence anchored by Brownlow Medallist Bert Deacon at centre half-back, and Ollie Grieve at full-back, the Blues were the outstanding team of the year, and rightful Premiers – although only a classic rover’s goal by Fred Stafford in the last minute of a nail-biting Grand Final against Essendon got the Blues home by one precious point.

Conley’s second Grand Final appearance came in 1949, when Essendon emphatically revenged their defeat of two years prior. Then in 1950, another Percy Bentley hunch sent Jack to a back pocket. There, Conley’s experience proved invaluable in his last two seasons, and his partnership with Ollie Grieve on the last line was soon as good as any in the game.

When Carlton lost a cliff-hanger first Semi Final to Fitzroy by one point in 1952, inaccuracy in front of goal proved fatal in a 10.9.69 to 8.20.68 score line. Defenders Grieve, Conley and Vin English were Carlton’s best, in what turned out to be Jack Conley’s last game for the Blueboys. Soon after that agonising loss, 32 year-old Conley accepted a generous offer to captain-coach Mornington Peninsula Football League heavyweights Seaford for the 1953 season, and the Blues did not stand in his way. He was farewelled from Princes Park with warmth and genuine appreciation for 135 games in eight seasons of loyalty and commitment.

Jack broke a wrist in his second match for Seaford, and was sidelined for 13 weeks. However, when his team made the finals, he insisted on playing in a splint and leather brace. Seaford missed out on the MPFL flag that year, only to bounce back and dominate the competition in 1954. The Tigers not only won the flag - Jack himself finished second in the League’s Best and Fairest award. In 1955, aged 35, he was honoured further when he was appointed captain of the MPFL representative team.

Seaford won another Premiership under Conley in 1956, and a grateful club heaped honours upon him when he announced his retirement at last. But after a year off, the old war horse reconsidered and made a comeback to the field for one last season with neighbouring Pearcedale in 1958.

A man with integrity, a happy disposition and a deep love of our great game, Jack Conley passed away on July 7, 2008, aged 87. At that time, he was one of only 57 players to have played 100 games and kicked 100 goals for Carlton.

Conley's nephew Doug Ringholt played with Carlton from 1963 to 1964.