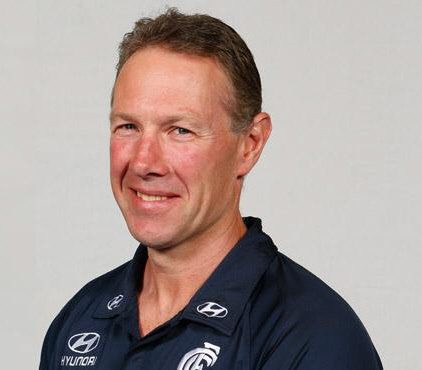 Amid the wave of ex-Collingwood personnel who joined Carlton between 2008 and 2012 was Gavin “Rowdy” Brown, one of the Magpies’ modern greats. A three-time Best and Fairest, Premiership player, club captain and Hall of Fame inductee, he had played 255 games and kicked 195 goals in black and white between 1987 and 2000.

Upon his retirement, Brown was appointed as an assistant to Collingwood’s senior coach Mick Malthouse, and over the next decade filled a variety of coaching and developmental roles including three seasons in charge of the Magpies’ VFL affiliate. In October 2010, amid a power struggle at Collingwood between Malthouse and his successor Nathan Buckley, Brown crossed to Carlton as an assistant to Brett Ratten.

However, despite coaching the Blues into the finals three times in four years, Ratten was on thin ice. Late in 2012 he was dismissed, and, to no-one’s surprise - eventually replaced by Malthouse. Carlton fell into the 2013 finals in the wake of Essendon’s suspension amid allegations of performance-enhancing drug use, and the Blues defeated Richmond in the first week of the finals before being eliminated by Sydney in a lack-lustre Semi Final at the Homebush Olympic Stadium.

Brown elected not to renew his contract and stay on after that defeat. Instead he signed with North Melbourne for 2014, and later explained why. “I coached the backline at Carlton last year,” he said, “and I had Kade Simpson, Andrew Walker and Lachie Henderson, who were all in the top-five of the best-and-fairest. I obviously really enjoyed that, and they were super people and super footballers. But my real passion is not necessarily really working with those guys who have been there and done that. What really excites me is watching young people develop and grow and live their dream. That's what I'm passionate about now, and really enjoy.”