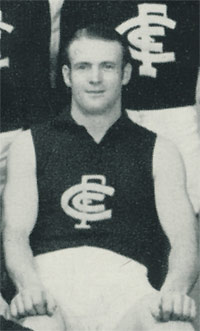 
One of just five Carlton players to have their name inscribed on the number 3 locker at Princes Park, Jack Bennett was an influential ruckman-follower for the Blues in two of our most famous Premiership teams; in 1945 and 1947. A tough, barrel-chested type, Jack was given the nickname “Mother Bennett” by the Blues, because he was a willing protector of his team-mates. While quite skilled and strong in the air, Jack was never a graceful player – more of a bulldozer who split packs with his bulk, and shovelled the ball out to advantage.

Bennett was born in Northcote, and recruited from VFA club Camberwell in 1940. His first game for Carlton – in round 4, 1940 at Princes Park – was quite remarkable in that the Blues’ elusive small forward Paul Schmidt kicked 7 goals, yet the home side was still well-beaten by the more cohesive Demons. From then on however, and throughout the uncertainty and deprivation of World War II, Jack was a fixture in the Carlton senior team.

He was tireless all day in Carlton’s epic 1945 ‘Bloodbath’ Grand Final victory over South Melbourne, and two years later, helped set up the circumstances for Fred Stafford to snap his fairytale, winning goal in the dying seconds of the 1947 decider. On that great day, the Navy Blues were willed to victory by their brilliant captain Ern Henfry, and an unrelenting Bennett in the ruck. Jack retired after that triumph; a fitting finale to a celebrated career.

More insights into Bennett's contribution in the 1947 Grand Final can be found in the article linked below. Opposition coach, Dick Reynolds, listed Bennett as the key player in the final moments of the match.

The Burnie Advocate 28 February 1948, reported that Jack Bennent was now residing in Cooee and it was hoped that he might coach the local team in the coming season.