Carlton defeated Fitzroy by 17 points at Brunswick Street Oval - despite being down by 5 goals at the last change.

The stakes were high when the Blues and the Maroons met at the Brunswick Street Oval on this August Saturday afternoon. Sitting fifth and sixth respectively on the ladder, a loss by either side would have ended their finals aspirations, and the game was played accordingly.

Throughout the first half, it was a dour, defensive struggle, and at half-time Fitzroy led 3.9 (27) to Carlton 3.6 (24). With his side lacking spark, Carlton coach Percy Bentley rang the changes; sending his captain Bob Chitty from full-forward to centre half-back, and versatile defender Jim Baird from defence into the attacking goal-square. Baird gave the Blues a target, and booted two of Carlton's four goals for the quarter – but the Maroons got on top all over the field and, aided by a strong breeze, added 7.10 to lead by exactly five goals at the last change of ends.

A worried Bentley rallied his Blueboys, demanding more direct football to maximise the wind advantage, then watched on as his team grabbed the game by the scruff of the neck. With Chitty impassable across half-back, and the likes of Ron Cooper and Lance Collins pumping the ball forward, ‘Bones’ Baird began marking everything that came his way. He kicked another five spectacular goals for the term - finishing the match with seven - as the Blues came roaring back and vanquished a stunned Fitzroy by 17 points; 17.13 (115) to 13.20 (98). Popular 1938 Premiership defender Don McIntyre played his 100th and last match for the Blues that day, ending his career in unforgettable circumstances.

This set a new record for comebacks from three quarter time margins for Carlton, being the first time Carlton had ever come back from 30 points at three-quarter time. Carlton would match this feat only twice more in the next 66 years, but then the record would be smashed in 2008.

At the end of this round Carlton were in 5th spot on the ladder with a percentage of 116.6. 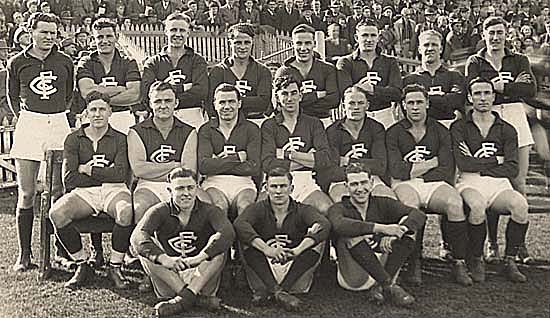 100th and Last Game: Don McIntyre transferred interstate with the RAAF
50 Games: Jim Mooring
Last Game Ron Cooper
Score Records: This set a new record for comebacks from three quarter time margins for Carlton, being the first time Carlton had ever come back from 30 points at three-quarter time. This effort was later matched in 1944 and 2008.