A speedy son of a gun! 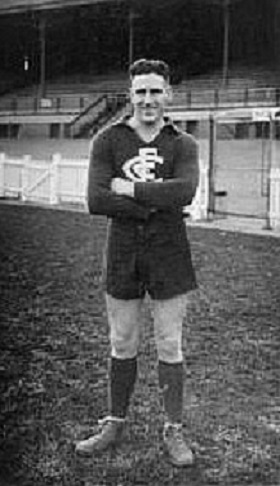 The son of 1914-15 Carlton Premiership defender Ted Brown, and the older brother of John Brown, Edward Vincent (Vin) Brown emulated his father by playing in two famous flag-winning teams for the Navy Blues. He was a speedy winger early in his career, before dropping back into defence, where his pace and versatility proved his greatest assets.

Vin was born in Warragul and came to Carlton as a 19 year-old from Thornbury CYMS in 1941 at a time when the British Empire and most of Europe was embroiled in World War II. He pulled on our navy blue number 15 guernsey for his first senior game in May, and celebrated a 14 point win over North Melbourne at Arden St. Another ten senior games followed in his debut season, but the year ended in disappointment when Essendon beat the Blues by 25 points in the Preliminary Final.

All VFL clubs struggled to field competitive teams throughout the war years, particularly Geelong. The Cats found it impossible to continue in 1942, and so dropped out of the competition for two years. Meanwhile, at Princes Park, coach Percy Bentley was constantly experimenting with his list of players. In early 1942 he asked 178 cm winger Vin Brown to have a crack at centre half-back, and was thrilled with the result. Although shorter and lighter than just about all his opponents, Brown had a strong leap, good anticipation and great acceleration. He became adept at punching the ball out into space, then recovering before his opponent to take possession and dash downfield.

By 1945, when the end of the war was in sight at last, Brown often played at full-back to allow the emerging talent of Bert Deacon full rein at centre half-back. These two - along with Bob Chitty and Jim Clark on the flanks – formed a solid defence that spurred the Blues into the infamous 1945 Grand Final against South Melbourne. Forever afterward called the “Bloodbath,” the ’45 Grand Final was a wild, spiteful, and at times vicious affair that Carlton won by five goals. In all, nine players were reported on 15 charges, and controversy over the violence lasted for months afterward. Vin Brown and Bert Deacon were among the minority who kept out of the brawls, and both were solid, reliable contributors all match.

In the aftermath of that extraordinary Premiership, the Blues faded to finish sixth in 1946, as Australia slowly came to terms with a markedly different post-war world. Bob Chitty retired at the end of that season, and was replaced as Carlton captain by the brilliant West Australian centreman Ern Henfry. Vin Brown started the year on a high note by making the final of Australia’s most prestigious professional foot race, the Stawell Easter Gift, but a run of niggling injuries on the field eventually limited him to just 11 matches.

Among those who returned from wartime service to play again for the Blues was full-back Ollie Grieve, whose welcome home allowed Brown to move upfield and join Deacon and Clark at half-back in 1947. With Ken Hands and Jim Baird in the key forward posts, and Henfry directing traffic in the centre, Carlton’s goal to goal line was the envy of the competition. To no-one’s surprise, the Blues topped the ladder, then easily accounted for Essendon in the second Semi-Final and qualified for a second flag decider in three years as raging favourites.

But Essendon, to their credit, served it up to the Blues from the first bounce on Grand Final day. In a tight, see-sawing contest, the Bombers seemed poised to cause a huge upset when they led by 5 points with barely a minute left to play, until Carlton launched one last desperate push forward and rover Fred Stafford was perfectly positioned to collect the ball as it spilled out of a pack. He snapped the most important left-foot goal in Carlton’s history, and the Navy Blues claimed Premiership number eight by the barest possible margin. Brown played on Essendon captain Dick Reynolds for much of the game, and was generally considered to have broken even with the wily Bomber skipper.

That second Premiership victory marked the high point of Vinny Brown’s career at Carlton. Having twice achieved the game’s summit, his interest waned after that and he played just eleven more games in the following year. His last appearance in the Old Dark Navy Blue came in Round 14 of 1948 – a 91 point thumping of Geelong at Princes Park. Jack Howell booted 8 goals that day, while Vin Brown limped off the field with a twisted ankle and called it a day. A proud member of the exclusive group of fathers and sons to have won a VFL/AFL Premiership, Vin Brown’s name was added to the number 15 locker at Carlton, in tribute to one of the most accomplished players of his era.

Almost two years later, in July 1950, Vin’s younger brother John Brown added more lustre to his family tradition, when he began his noteworthy 90-game career for the Blues against Essendon.

Vin Brown passed away on the 11th May, 1989, aged 67, and the Carlton team wore black armbands in his honour on the following weekend.