Carlton defeated Geelong by 32 points at the MCG. Ken Baxter kicked 8 goals for the triumphant Blues.

Neither team played well during this Semi Final, but Carlton played well enough to easily account for Geelong. After an even first quarter, the Blues kicked 5 goals to 2 in the second quarter and were never headed for the rest of the game. Geelong were behind by 9 points at half-time, but the should have been closer, having kicked 5 consecutive behinds at one point in the second term. 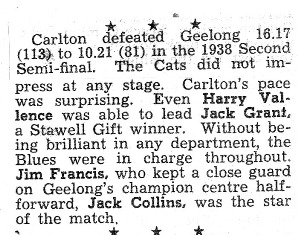 Geelong had a lot of the play in the third quarter, but inaccurate kicking again cost the side, a terrible 1 goal 8 behinds to Carlton's 4 goals 2 ending the match as a contest. Two quick goals in the last quarter gave Geelong hope, but after Baxter and Vallence replied for the Blues the final result was never in doubt. Ken Baxter started as centre half back and ended up scoring 8 goals.
Jack Hale was involved in a heavy knock in the second quarter with blood streaming down his face. He stayed in the ground and was one of Carlton's better players. 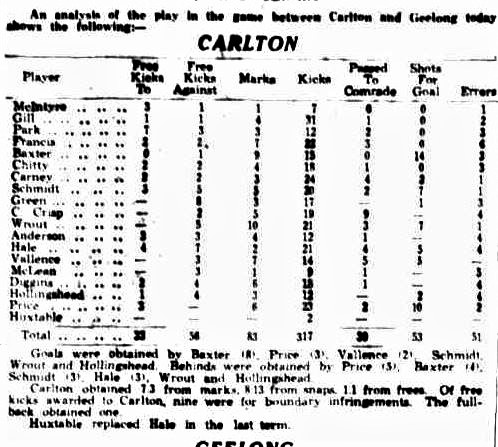 Last game: Eric Huxtable
Interesting Fact: Our longest run of games played between Flags was about to come to an end...