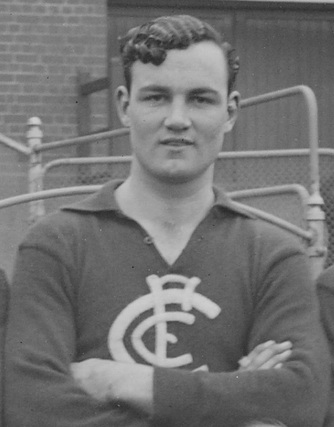 A fine player with a most distinctive name, John Henry (Harry) Hollingshead had a short but eventful career with the Blues prior to World War II. Recruited from Kilmore, he played two senior matches for the Blues in 1936, before deciding that VFL football wasn’t for him, and heading back home.

But two years later, Carlton convinced the 22 year-old follower-forward to have another crack at the big time in a powerful team being assembled by the Blues’ new captain-coach; former South Melbourne champion Brighton Diggins. Hollingshead duly came back to Princes Park for the first match of the new season, and from then on, played a significant role in Carlton’s march to the 1938 Premiership.

Sharing the ruck duties with his captain, Harry was running into top form when Carlton met Essendon at Windy Hill in round five of 1938. He took a series of strong marks up forward that warm afternoon, and banged through five goals. He also tangled with a couple of Bombers who tried using brute force to put him off his game. In retaliation for one incident, Hollingshead decked Bomber Frank Kelly in sight of the umpire, and the tribunal suspended him for five weeks.

Harry’s return to the senior side came with a 50-point drubbing of North Melbourne at Arden St in round nine. By then, Diggins knew that Harry’s skills were most useful in the thick of the battle, so for the rest of that eventful year, he and Hollingshead combined in a ruckman-ruck rover duo that was as good as any in the league.

The Blues ended 1938 on top of the ladder, and swept to our first Premiership since 1915 by accounting for Collingwood in a tough Grand Final. In front of a record crowd of almost 93,000 at the MCG, Diggins’ game plan and on-field example won the day for the Blues, as did the dominance of rover Jack Hale. Hollingshead gave Diggins solid support around the packs, in a ruck division that gave Carlton’s small men first use of the ball throughout the match.

In the aftermath of that long-awaited sixth flag, and the celebrations that followed it, the Carlton Football Club suffered a massive Premiership hangover in 1939. Niggling injury restricted Harry to 13 games for the year, while inconsistency cost the club dearly. Despite a late season rally, the Blues missed out on a finals’ place by four points. Then, as the finals got underway, Australia was plunged into fear and apprehension by Great Britain’s declaration of war against Germany. World War II had begun. 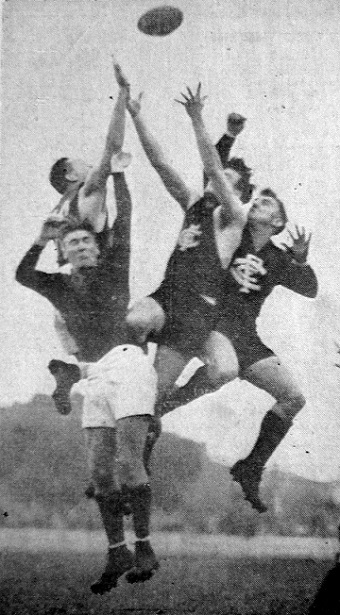 Harry played only three more times for Carlton in 1940, before he joined the hundreds of VFL players and ex-players who volunteered to serve their country. His final appearance for the Blues came in the cauldron at Victoria Park in May, when the Premiership trio of Diggins, Hollingshead and Hale played together for the very last time. Sadly, they couldn’t top off a memorable partnership with one more win, but their deeds on a greater stage live on.

After that, Harry spent five years in uniform, and rose to the rank of Lieutenant while serving in a series of advanced stores depots during the bitter campaigns against the Japanese army in the South West Pacific between 1941 and 1945. When peace came at last, his duties kept him in the services for some months before he made it back safely to his family in 1946.

Back home, Harry couldn’t wait to resume his involvement in football, and quickly accepted the role of captain-coach with the Seymour Lions in the Waranga North East Football League. Beginning an era of sustained success, the Lions won consecutive premierships in 1947-48, instantly making Harry a club legend.

Thereafter, Harry lived an apparently happy and contented life, until he passed away in 1998, aged 82.