The Mickey and Soapy show... 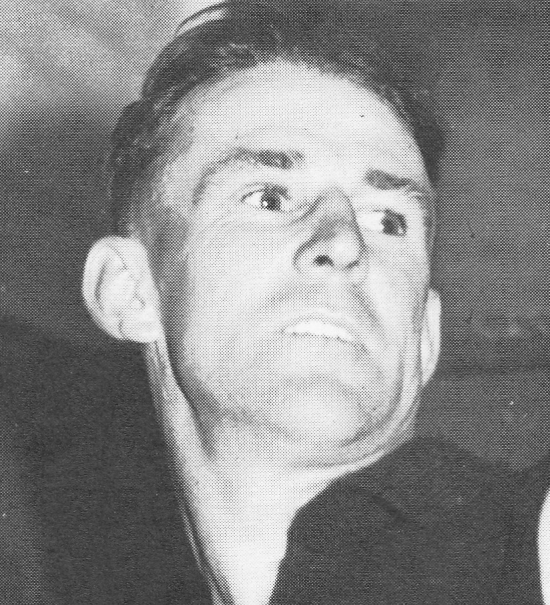 His name was William, and he called himself Creswell - but everyone knew him as Mickey. Born William Edward Creswell Crisp at Mount Koorong (near Wedderburn in Central Victoria) in 1908, ‘Mickey’ Crisp was a star for the Blues throughout the decade prior to World War II. At first a dangerous flanker who combined brilliantly with Carlton’s champion full-forward Harry ‘Soapy’ Vallence, he later moved into the centre, where his tenacity and outstanding foot skills helped drive the Blues to the 1938 Premiership.

Mickey began his football journey at Wedderburn, and came under the notice of Carlton’s scouts in 1930 when he and another future Blue; Norm Le Brun, were joint winners of the Michelson Medal as Best and Fairest in the Bendigo Football League. Remarkably, both were playing for Sandhurst. Blues’ coach Dan Minogue invited 21 year-old Mickey to pre-season training at Princes Park in 1931, and was impressed enough to include him among four debutantes in the team to meet Richmond in the first game of that new season.

Crisp kicked a goal with his first kick in that match, but it was shortly afterward - when Crisp wheeled out of a pack, steadied, then fired a bullet-like stab pass to full-forward ‘Soapy’ Vallence - that Minogue knew that he had found another major weapon for Carlton’s arsenal. For the next six seasons, Crisp and Vallence – Mickey and Soapy – formed the twin spearheads of a potent Carlton attack. Crisp’s ability to win the ball upfield, then regularly find Vallence on the lead, became a hallmark of Carlton’s style of play. And if Soapy was out injured, then Mickey was an adequate stand-in. Surely one of the best double acts of all time, Crisp and Vallence averaged a remarkable 110 goals a season between them from 1931 to 1936.

When Carlton annihilated Collingwood by 88 points in the 1931 first Semi-Final, Soapy Vallence set a goal-kicking record for the Blues that still stands. His haul of 11 majors (at least four of which came directly from Crisp) is the most by a Carlton player in a VFL/AFL finals match. Relishing the open spaces of the MCG, Mickey roamed across half-forward to send the Blues into attack time and time again, and topped off a fine performance with two opportunist goals himself. Unfortunately, that big win seemed to make the Blues somewhat over-confident, and we lost the following week’s Preliminary Final to Geelong by one straight kick in a thriller.

The Soapy and Mickey show gained more momentum in 1932. The Blues swept all before them to claim the minor premiership, while Vallence won both Carlton’s and the VFL’s goal-kicking awards with his tally of 97. Crisp (who steered through 53 season goals himself) was honoured with selection in the Victorian State team (as was Soapy) and the Blues seemed headed for football glory when they blitzed Collingwood once more in the Preliminary Final. This time, the margin was 75 points. For the second time in two years, Harry booted eleven goals, while Mickey chimed in with another four – and for the second time in two years, triumph was about to be followed with heart-break for the Blues.

Carlton faced Richmond for the ’32 flag, chock-full of confidence, and warm favourites with the pundits. But in an even, skilful, and fierce contest, Richmond prevailed over the Blues by nine points. Soapy made the most of his opportunities to bag five goals, while Mickey, for one of the few times in his career, struggled to break away from a committed Tiger defence.

That double disappointment was to be Crisp’s best chance of a Premiership medal for six years, although he continued to play brilliant football and rack up individual honours. In 1934, he had a stellar year; winning the Blues’ inaugural Robert Reynolds Memorial Trophy (named after a former club Vice-President, and awarded to the Blues’ best and fairest player over the season). In mid-year, Vallence was sidelined for four matches by injury, so Mickey stepped up and claimed the club’s goal-kicking award as well, with 44 majors.

In 1936, Mickey’s younger brother Gordon joined him at Princes Park, and the brothers played together for the first time in navy blue against Melbourne in June. In the latter part of that season, coach Frank Maher (who had taken over the reins of the club from Dan Minogue in 1935) asked Mickey to take on the added responsibility of playing in the centre.

Crisp accepted the responsibility offered to him, and if anything, became an even more valuable contributor to the team. Although shorter and lighter than many of the opponents he encountered, he lacked nothing in courage or perseverance. His judgement of the flight of the ball was superb, he rarely wasted a kick, and his consistency brought him selection for Victoria again in 1937, ‘38 and ’39.

Having made the finals four times in the previous six years and failing each time, the Carlton Football Club underwent dramatic changes in 1938. Into the chair as President came 39 year-old Kenneth George Luke – already a successful businessman, who was about to prove himself as one of the most influential football administrators of all time. In turn, Luke appointed former South Melbourne Premiership star Brighton Diggins as captain-coach of Carlton, and the stage was set for a big improvement by the Navy Blues.

Diggins appointment proved a masterstroke. An inspirational on-field leader and a clever tactician, he led the Blues to the top of the ladder after the home and away rounds, and, three weeks later, into another Grand Final clash with Collingwood. On Saturday, September 24, 1938, 96,834 spectators packed into the MCG to see Carlton end a 23-year Premiership drought at last, with a narrow yet emphatic 15 point Grand Final victory over their fiercest rival. Rover Jack Hale was superb for Carlton, as were Mickey Crisp, Diggins and centre half-forward Jack Wrout, in Soapy Vallence’s last game for his beloved Blues.

Amidst the Premiership celebrations, there was double joy in store for Crisp when he was announced as winner of his second Robert Reynolds Trophy. Another Best and Fairest award, this time in a Premiership team, made Mickey Crisp one of the brightest of VFL stars. Sadly, Mickey’s stardom, like many others, was about to be obscured by the clouds of war.

Less than a year after Carlton’s 1938 flag triumph, Australia was plunged into the turmoil of World War II when Germany invaded France and rejected an ultimatum from Great Britain to withdraw. As part of the British Empire, Australia declared war on Germany and her allies on September 1, 1939. Thousands of young men promptly volunteered for active service, including dozens who were members of VFL teams.

Mickey Crisp was among the early volunteers, but his job as a by-laws officer with the Melbourne City Council was deemed as a reserve occupation, important to the orderly continuation of civilian life. He was assigned to a militia (army reserve) unit and was able to continue to play for Carlton until the army decided that they needed him.

Amid all the disruption, Carlton slid to fifth place in both 1939 and 1940, while the VFL resisted calls to suspend the competition for the duration of hostilities. In 1941, former Richmond champion Percy Bentley began his tenure as coach of Carlton, and lifted the Blues to the minor premiership. A shock semi-final loss to Melbourne then put the Blues into a Preliminary Final showdown against Essendon.

In what was to be his 183rd and last game for the Blues in his familiar guernsey number 12, 33 year-old Mickey Crisp went to a half-forward flank for that game, but couldn’t prevent Essendon from recording a comfortable 25-point victory. Even so, he walked off the MCG that September afternoon secure in the knowledge that he would be remembered as one of the great Carlton players of his era.

A short while later, Mickey was called up for active service, and spent the remainder of the war years with a coastal artillery unit based in Darwin. He returned home safely (with the rank of Sergeant) in December 1945, and was soon actively involved with the Carlton Football Club again. A decade later, he was elected to the committee, where he was a prominent figure in the 1957 dispute that split the club between supporters of Jim Francis and Ken Hands for the role of coach.

A long land celebrated life of service to the Navy Blues concluded on April 15, 2001, when William Edward Creswell ‘Mickey’ Crisp passed away at the age of 93.

The Herald January 17 (p8) 1940 announced that C. "Mick" Crisp had been appointed coach of Fitzroy.