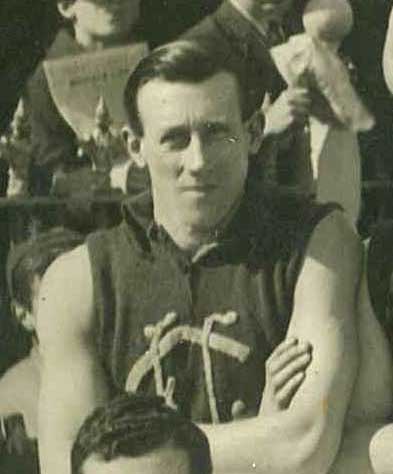 Although he made only 22 senior appearances for the Blues in a career spanning seven years, Jimmy Goonan carved himself a niche in Carlton Football Club history when he captained and coached the club’s Reserves team to a hat-trick of Premierships in 1926-27-28.

Born in Carlton, and recruited from neighbouring VFA club Brunswick in 1922, Goonan arrived at Princes Park as a tough and committed 25 year-old wingman whose father, also named Jim, had played twice for the Blues in our VFL foundation year of 1897. Jim junior won a place on the centre line in the Blues’ seniors in round 7, 1922, and went on to play nine matches for the season – including Carlton’s narrow loss to Essendon in the first Semi Final.

Perhaps the highlight of Goonan’s second year came the very next time the Blues met Essendon - in round 4, 1923, when Jimmy pushed forward from his wing and slotted his one and only career goal. But after that, the season went downhill and the Blues wound up in seventh place.

Goonan played another five matches in 1924, before he was approached by Carlton’s committee and asked to take charge of the seconds squad. The ‘twos’ had had their own competition since 1920, staging highly-popular curtain-raisers at each weekend’s senior matches, with their own Premiership Cup as the prize. Goonan accepted, and was an immediate success in his new role. He marshalled an assortment of veterans, journeymen and wide-eyed youngsters into a cohesive, determined team, and on Grand Final day 1926, the Blues’ Reserves destroyed Geelong Reserves by 52 points to win Carlton’s first-ever lower grade Premiership.

Jimmy carried on the same role into 1927, and had taken his team back to the top of their ladder when he was somewhat surprisingly recalled to Carlton’s senior side for the round 16 clash against Hawthorn. He was a solid performer in the centre that afternoon, as Carlton beat the Hawks convincingly, and cemented a top four standing.

Jimmy played the last two games of 1927 with the seniors (while still coaching the seconds) and experienced the magic atmosphere of finals football once more when Carlton met Richmond in the first Semi Final. The deep rivalry between the Blues and the Tigers manifested itself in another hard, physical match that eventually went the way of Richmond by an agonising six points.

While deeply disappointing, that loss freed Jimmy to concentrate on his duties with the seconds, and strengthened his team with an array of regular senior players, including champion forward Harry Vallence. Jimmy and his team then cruised into their second successive Grand Final, and accounted for South Melbourne by 19 points in a close, entertaining contest.

In 1928, having realised (or perhaps been advised) that his career in the seniors at Carlton was all but over, Goonan remained in his role with the Reserves and collected a hat trick of Premierships when his side knocked over Geelong for the second time in three years. The decider was actually played at the MCG on the Thursday prior to the senior Grand Final between Collingwood and Richmond, on the Show Day holiday in Melbourne. It was a bold experiment, and it paid off when more than 8000 Carlton and Geelong supporters turned up for the game.

Having delivered those three Reserves Premierships to Princes Park, Jimmy retired from VFL football in 1929, and was fondly farewelled by the Blues when he accepted an attractive offer to captain and coach VFA club Preston. The impetus for a move of a handful of Carlton players to Preston came in 1929 when the club appointed Jim Goonan as captain-coach. "Bull" Adams, captain-coach in 1928 trained pre-season with Richmond, and Preston, believing Adams would be lost to the League club appointed Goonan as his replacement. Adams eventually could not come to terms with Richmond and returned to Preston as a player under Goonan. Goonan like many players of the time was also a professional athlete of some note and played just 24 games with Carlton over six years, but had captain-coached their Seconds to three consecutive premierships from 1926 to 1928. After two seasons of modest success with Preston, he returned to Carlton, again as captain-coach of their Seconds.

In later years, he was a familiar figure at Carlton games, right up until shortly before before he passed away in 1988, at the grand age of 91.

March 2018 and the club was contacted by a descendant of Jim Goonan.
This is club historian Tony De Bolfo's article;
http://www.carltonfc.com.au/news/2018-03-10/tom-shares-images-of-times-long-gone