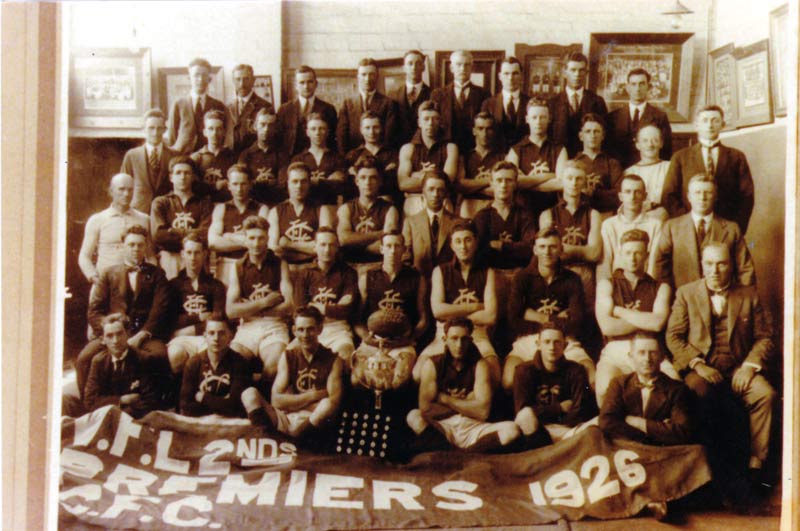 In 1926, Carlton won their first Reserves Premiership. The game was played on a Thursday - Melbourne Show Day, at the MCG.

Jack Way was a late replacement. The player who dropped out is unknown.

This game was the curtain raiser to the senior Grand Final held on the M.C.G. on Saturday October 9.
The Blues had the first use of the breeze.
Both sides started the game with plenty of vigor, but Carlton's following division were on top, and three goals in the first eight minutes were the direct result of a winning ruck combination. Geelong got back into the game and the Blues led by 7 points at the end of the first quarter.
Geelong attacked for most of the second term, but the Blues's backline stood up well. Carlton gradually assumed control of the game through two good late goals by Way and Marchesi, and at the main break held an 18 point lead.
Carlton then dominated in the rucks and on the forward line. The Blues kept Geelong scoreless, while they added 6.3 in the third quarter.
The Blues winning in all departments then ran out easy winners by 52 points.
The game was a disappointment after the tense and exciting struggle these two teams had displayed in the second semi final.

"A jubilant throng assembled at Fernshawe House, Carlton, on Saturday night, at the invitation of the Carlton Football Club committee, to congratulate the second eighteens on it's victory and wish the Carlton team a pleasant trip to Tasmania, whither they are going for a trip, in which games will be played and sight seeing shared.
An enjoyable snooker entertainment was given. Mr. D. Young, president, was in the chair, supported by members of the executive." (The Argus, Oct 11)

The Reserves Premiership was called the Rosen Cup.

"Whatever pretensions Geelong may have harboured regarding the Rosen Cup, for having been holders twice it needed only another premiership for it to become their's in perpetuity...." (The Argus, Oct 11)

May 01
Opening round of the season.
Carlton played Hawthorn at Princes Park
"The game between Carlton and Hawthorn was very evenly contested for three quarters, but in drenching rain in the last quarter Carlton overwhelmed their opponents, kicking 8.5 to 1.1 Cahill (Carlton) was best the man on the ground." (Age)
Carlton won; 16.15.111 - 8.12.60
Goals; Mullens 8, Cornell 3, Lewis 3, Davis, Muir.
Best; Cahill (BOG), Martin, Parkhill, Simmons
Umpire; Britten

July 03
Carlton played Richmond at Princes Park
The ground was very muddy. An even game up until half time then the Blues got on top of the visitors.
The Argus said;
"Williamson a recruit from Woori Yallock, on his showing for two games will make a first-rate player."
Carlton won; 13.10.88 - 7.6.48
Goals; Mullens 5, Dunn 4, McAlpine, McPherson, Koop, Way
Best; Cahill, Robertson, Koop, Downie, Mullens, McAlpine
Carlton is third on the ladder with 32 premiership points

July 10
Carlton played St.Kilda at St.Kilda
The Blues held a 34 point lead at the last break. In the last quarter the Saints dominated.
They scored 5.4 for the term and Carlton only ventured forward on three occasions.
Fortunately for the Blues each time they scored a goal and won the game by that margin.
Carlton won; 10.12.72 - 7.12.54
Goals; Wright 2, Gilby 2, Davis, Way, Cornell, Everitt, Goonan, Williamson
Best; Goonan, Quirk, Clark, Wright, Everitt.
Carlton is third on the ladder with 36 premiership points

August 14
Carlton played Geelong at the Corio Oval.
The weather was ideal for football and more than 2,000 were in attendance.
Geelong led the premiership ladder, their last defeat was by the Blues at Princes Park back in May.
Carlton were determined to knock off Geelong for the second time. However, a mishap on the Geelong Road meant that some selected players did not arrive at the ground on time.
Carlton team;
Backs; Clarke, McVay, Gilby
Half backs; Downie, Cahill, Wright
Centres; Goonan, Everett, Hill
Half forwards; Lewis, Way, Dunn
Forwards; Cornell, Davis, Koop
Followers; Parkhill, Williamson
Rover; Robertson
Umpire; Shaw
Boundary; Hazel, McLean
Carlton lost by 42 points.
Carl; 0.4 3.3 3.4 4.4.28
Geel; 2.4 3.8 8.10 9.16.70
Goals; Dunn 3, Robertson
Best; Cahill, Parkhill, Goonan, Downie, Way, Dunn, Robertson