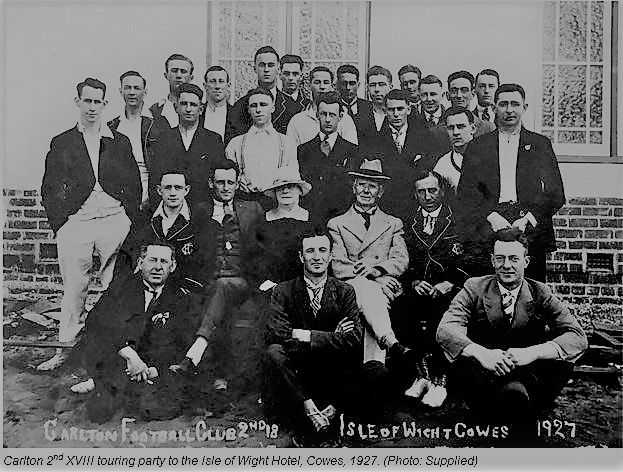 23 players took part in the final series. Seems to be 23 players plus officals in this picture. Can anyone name them?
Charlie Davey is the tallest back row, Maybe Harry Vallence is back row 3 from Davey on the right.
Jimmy Goonan standing back row to the immeadiate left of Davey. Could be Frank Brody reserves secretary front row far left.

Horrie Clover (coach) had said he has no desire to play, but by late April he had changed his mind.

In 1927, Carlton won our second Reserves Premiership in a row. 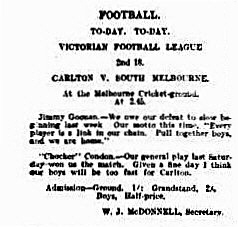 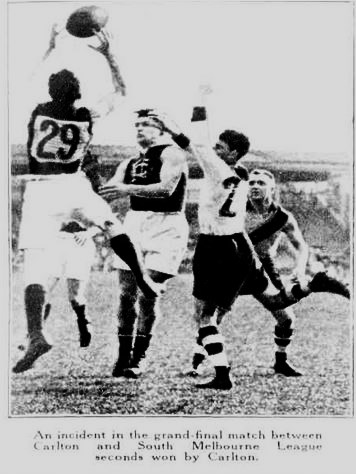 1927 September 03: "Success of Carlton's Second Eighteen Due to Coaching and Organisation."

The Carlton Football club decided to appoint the committee of the Second Eighteen or Reserves.
http://nla.gov.au/nla.news-article204183848

May 07
Carlton played Fitzroy at Princes Park
Before the game the 1926 Reserves premiership flag was unfurled by the wife of the president, Mrs. Reyment.
The visitors got off to a good start to lead 4.3 - 1.0 at quarter time. The Blues hit back to trail by 4 points at half time. A very even second half followed. Recruit C. Davey from Chelsea was put on the ball and his high marking and play around the ground was a feature of the remaining quarters. The lead changed hands with the Blues winning by 6 points.
Carlton won; 10.6.66 - 8.12.60
Goals; Mullens 4, P. Kennedy 3, Vallence 2, Byrne
Best; Robertson, Vallence, Davey, Robbins, McAlpine, Mullens, T. Kennedy
Carlton
Played 2, Won 2, Lost 0, For 145, Against 113, 128.31%, Points 12

June 04
Carlton played Richmond at Princes Park
After this match the Carlton Reserve team travelled to Euroa to play a match there.

June 25
Carlton played Collingwood at Princes Park
Monday's Argus said it was about the 20th. game in a row the Blues had won.
A even game throughout with the visitors holding a 3 point advantage at half time. At three quarter time the Magpies had extended the lead to 15 points. Carlton goaled immediately at the start of the final term. The Blues then overpowered Collingwood and were led brilliantly by J. Goonan.
Carlton won;
Carl; 11.9.75
Coll; 10.9.69
Goals; Way 3, Mortimer 2, Davey 2, Skehan, Kelleher, P. Kennedy, Styles
Best; Goonan, Mount, Kelleher, Downie, P. Kennedy, Mortimer, Styles, Davey
Carlton first
Played 9, Won 9, Lost 0, Drawn 0, For, Against, %, Points 36 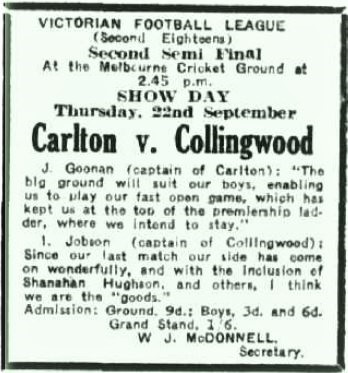 September 22 Thursday, Show Day
Carlton played Collingwood in the Reserves Second Semi Final on the MCG
Attendance; 8,349 (record) Gate takings £300 also a record.
Carlton captain Jimmy Goonan was injured and did not play.
The Blues were on the back foot from the opening bounce. Collingwood were contantly attacking, were quicker and held sway in the air. The Carlton defenders had to work over time with Denis Kelleher, Robbins, Bill Downie and Parkhill the best of them. At half time the Blues were 19 points in arrears.
On resumption Collingwood goaled and and it looked grim for the Blues. However once again the defence stood up and the 'Woods only managed 5 behinds for the rest of the third term. Carlton very rarely were able to get the ball into their forward line. Twice they went forward, both times through the good play of Frank Mount which resulted in goals to Jack Way and Harry Vallence. At three quarter time the Blues trailled by 18 points.
Charlie Davey was swung into the ruck and immediately started taking marks around the ground. When both Allan Skehan and George Styles goaled the crowd was up on its feet. Collingwood were tiring and Denis Kelleher repulsed many of their attacks. Carlton crept closer through adding several behinds. Two points separated the teams when Frank Mount brilliantly ran down from the wing and threaded an angled goal to give the Blues the lead with six minutes to go. Both sides were trying to attack when Parkhill pulled down a mark in a pack of players in front of the goals. Parkhill kicked truly to give the Blues a 10 point win.
Carlton team;
Backs; Downie, Way, Parkhill
Half backs; Simmons, Kelleher, Robbins
Centre; Mount, Robertson, Fitzgerald
Half forwards; Outram, Vallence, Stone
Forwards; Cahill, Davey, Crowe
Followers; Davies, Skehan
Rover; Styles
Carlton won by 10 points
Carl; 0.3 3.5 ---- 9.10.64
Coll; 3.3 6.6 ---- 7.12.54
Goals; Vallence 2, Way 2, Skehan 2, Styles, Mount, Parkhill.
Best; Mount, Kelleher, Robbins, Downie, Davey, Parkhill, Skehan, Styles, Vallence

October 01
Carlton played South Melbourne in the Preliminary Final on the M.C.G.
South had use of the strong wind in the first quarter. Driving rain midway through the second term turned the ground into a quagmire.
Carlton did most of the attacking but they could not break through. The sodden, leaden ball made marking impossible and 'soccering' was the order of the day.
South led by 15 points at the last change.
If Carlton had won the match they would have been premiers. However as they lost, they had the right to challenge South Melbourne because the Blues had finished on top of the ladder at the end of the home and away season.
Carlton team;
Backs; Parkhill, Robertson, Downie
Half backs; Fitzgerald, Kelleher, Robbins
Centres; Mount, Goonan, Crowe
Half forwards; Outram, Vallence, Way
Forwards; Cahill, Davey, Stone
Followers; Skehan, Davies
Rover; Styles
Umpire; Petrie
Carlton lost by 7 points.
Carl; 1.1 7.5 8.6 9.10.64
S.M. 8.5 8.7 10.9 10.11.71
Goals; Vallence 3, Davey 2, Kelleher, Skehan, Outram, Parkhill
Best; Vallence (half forward), Mount (wing), Goonan (centre), Kelleher (half back), Skehan (following).