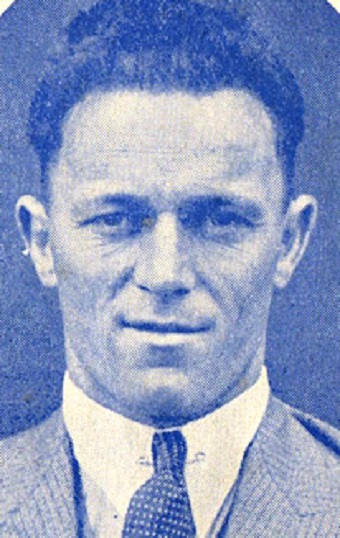 Born with exquisite football skills and an aristocratic name, Edward Augustus Ansell Clarke was Carlton’s dynamic rover-forward of the Depression era. Known and recognised by his unusual middle name throughout his career, he was a champion who captained Carlton, won our Best and Fairest, represented Victoria, and played finals football in six of his nine seasons in the decade prior to World War II.

After he was recruited from North Carlton Presbyterians in a strong suburban churches league, Clarke languished in Carlton’s reserves side for more than a year until early 1929, when he clicked into form with a string of dominant games for the twos. In one of those matches, he kicked a freakish 13 goals and simply demanded a place in the Blues’ senior team.

His debut for Carlton firsts came against North Melbourne at Princes Park in June, 1929. Wearing guernsey 31, he shared the roving duties with his captain, Ray Brew, and before the end of that first season it was obvious that Clarke was something special. Quick and elusive, with superb foot-passing skills, he was courageous, and a deadly opportunist around the goals.

He was a strong performer in Carlton’s unsuccessful finals campaigns in 1930 and ’31, and his combination with champion full-forward ‘Soapy’ Vallence lifted the Blues into a 1932 Premiership showdown against Richmond. Clarke and Vallence were both superb in that tough campaign. Vallence took Collingwood apart on his own in the Preliminary Final, kicking 11 goals, while Clarke’s hard running and poise under pressure in the second half of the Grand Final almost single-handedly dragged the Blues back into contention. As the clock ticked into time-on in that frantic last quarter, Carlton were just in front – but Richmond steadied when it counted, and won the flag by nine points.

Maintaining his rich vein of form, Clarke was selected in the VFL team for the 1933 Carnival in Sydney. The Vics dominated again that year, remaining undefeated in their five games. Back home, he was in action again in September, as the Blues fell to Geelong by 13 points in an unusually poor standard first Semi Final. Clarke was voted Best on Ground for Carlton, while both sides appeared; ‘so eager and anxious they fell over themselves,’ according to one newspaper report.

In 1936, Ansell Clarke won Carlton’s Best and Fairest award in a year when his 19 games brought a career-high 42 goals. Maintaining his consistency in big matches, he was as busy and constructive as ever in Carlton’s first Semi Final loss to Melbourne, and was the logical choice when the Blues sat down to appoint their captain in 1937.

Under Clarke as their skipper, and a new coach in former Collingwood Premiership ruckman Percy Rowe, the Blues began the season with three losses in four starts. Then, Clarke suffered a leg injury that sidelined him for ten games. In his absence, Carlton quickly dropped out of contention, although when he did eventually return, he inspired his side to three good wins from the last four matches. Even so, Carlton still fell agonisingly short of fourth place (and yet another finals berth) by two points.

After those eight games and 13 goals in his one season as leader of the Blues, Ansell Clarke departed Princes Park the following year, to accept a lucrative offer to captain-coach St Kilda. Ironically, Carlton then won that elusive sixth VFL Premiership in 1938, under former South Melbourne champion Brighton Diggins as captain-coach. Clarke meanwhile, took the lowly Saints into the finals in 1939, on the way adding another 26 games and 47 goals to his impressive playing record. His tenure at the Junction Oval concluded in 1940, as Australia and the British Commonwealth was dragged into the horrors of World War II.

Sometime after the war ended in 1945, Ansell Clarke was welcomed back to Princes Park, and gave the Blues further valuable service over many years as a talent scout. Rightfully regarded as one of the greatest Blues never to have won a Premiership, he lived a long and fruitful life until his passing, at the age of 95, on October 15, 2002.

What's In A Name

"Admirers of the play of Ansell Clarke have never known him by any other Christian name , and it will probably surprise them to learn that he is called "Ted" (short for Edward) by members of his family. He is not sure how he came to be called Ansell, but he knows that the name has stuck to to him since he was aged six years. "I think it came from a negro boxer, Ancel Bell, who was in Australia about that time." he said yesterday. Clarke is in splendid form at Carlton." (Argus May 28 1936)

Clarke's place of birth was the Gippsland town of Outtrim, located west of Leongatha.
During World War II, he served in an RAAF Construction Squadron in the Pacific Islands.
Throughout his life Ansell was a keen golfer. He was a member of both the Medway and Flinders Golf Clubs, and captain of the Footscray RSL in the A Grade Pennant Golf Competition.