The Sporting Globe said the attendance was 20,000
Carlton won the toss and kicked to the outer end. The wind was blowing across the ground so neither end was favoured. The visitors attacked but twice Frank Gill repelled the forward moves. Again, Collingwood went forward and this time Jim Park marked in the goal square. Park kicked to Eric Huxtable on to Jack Carney and to Jack Wrout who received a free kick right in front but only managed a behind. The Woods then replied with a behind to Coventry and a goal to Phonse Kyne. Then Wrout had another chance to goal but only scored another behind. A nice piece of play from Jack Hale who passed to Ron Cooper and he bought up the Blues' first major with a well judged drop kick. Keith Shea then flashed in and followed up with another goal from a punt kick of 60 yards. Carlton were starting to dominate and Arch Shields added the third goal, and he then passed to Ansell Clarke for the Blues' fourth. Frank Anderson was on the receiving end of a beautiful Shea drop kick, he marked and goaled. At quarter time the Blues led 5.6 - 2.3
The wind was now favouring the outer end and Collingwood added 1.2 The Carlton defence led by Gill, Jim Francis and Anderson proved a stumbling block for the visitors. Good play by Carney and Shea enabled Pat Farrelly to bring up Carlton's first score for the quarter - a snapped behind. Cooper and Clarke gave Shea a chance but he added another behind. Collingwood goaled to reduce the margin to 5 points. Then the 'Woods added a further two goals to hit the front. A nice mark to Farrelly and he kicked to Shea but his attempt dropped short. Shea was in the thick of the action and received a free. His kick into the forward line resulted in a scrimmage and Wrout got his left foot to the ball and snapped a goal to level the scores. At half time the score was 6.9 apiece.
Collingwood attacked and brought up two behinds. Carlton's time with the wind was dwindling. Then Don McIntyre, Bob Chitty and Wrout combined with the latter adding the Blues' sixth goal. 'Micky' Crisp kicked a behind, and Shields missed from close in. The 'Woods attacked but once again McIntyre started another forward move and passed to Bob Green and then through Crisp and Wrout and onto Clarke and the Blues' captain added another goal. Collingwood attacked but Frank Gill took a clever one handed mark over the Magpie champ Coventry. The third quarter ended with the Blues holding a slender 10 point lead and kicking into the wind in the last term. 8.12 - 6.12
From the bounce the Blues attacked and Cooper kicked the Blues' ninth goal. Collingwood whipped the ball forward but Coventry missed from close in. Three times they continued the attacks, but Gill, Francis and Huxtable stopped them each time. Carlton then attacked and Shea running into an open goal missed the easiest of chances. Francis muffed a kick-in and the Magpies pounced and added their seventh goal. They quickly added another major and were only 4 points behind. Both teams brought on their 19th man with Fred Gilby replaced Chitty. This sparked the Magpies and they hit the front when they scored another goal. Shields received a free kick and his shot added a behind to reduced the margin to just one point. The Blues kept up the attack and Hale drove the ball deep into the forward line where Wrout soared over the pack to mark and goal amid a tremendous roar. Wrout again marked brilliantly, and put the issue beyond doubt when he added the sealer and Carlton's eleventh goal. The Blues running out victors by 10 points.


At the end of this round Carlton were in 5th spot on the ladder with a percentage of 110.1. 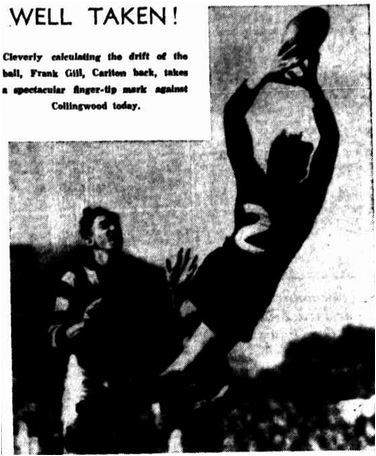 The caption says Gill (21), the 1 is obscured.
Sporting Globe August 21 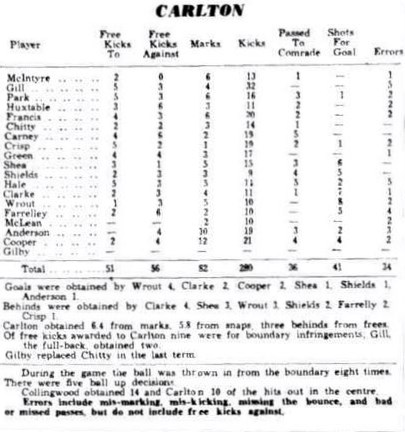