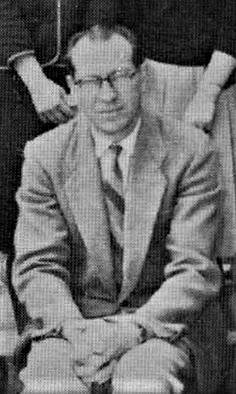 Left: Monty Brown photographed in 1962 at the Frankston Teachers' College (Vic) where he was a lecturer.

Montague ‘Monty’ Brown was born in North Carlton, and played just once at senior level for the Navy Blues; in a 22-point victory over Footscray at the Western Oval in the last round of the 1937 season.
A local from North Carlton, Monty was recruited from University High School Old Boys. He was 24 years old when he wore our number 18 guernsey for the first and only time, playing in the centre on that auspicious day.

Under caretaker coach Percy Rowe, Carlton recovered from a lack-lustre first half of the year to win eight of the club’s last ten games – yet missed out on a finals berth by two points.
Therefore, this match was also the last for retiring Carlton captain Ansell Clarke and brilliant forward Keith Shea, who had accepted a lucrative offer to play in Western Australia.

"Coming to Carlton from Melbourne High School Old Boys (Metropolitan Amateurs) in July, Monty Brown soon established a big reputation with the Seconds, and was tried out in the centre against Footscray on Saturday.
He did not make an impressive debut but a heavy knock early on in the game may have explained his quietness. He nevertheless managed to convey an impression of coolness and football sense particulary in disposing of the ball.
Brown a science master at Box Hill High School and has a fellow teacher in the side in McIntyre."
(Herald August 30 p20 1937)

At the start of the 1939 season Brown was given a clearance to the Camberwell Football Club, the next year he was cleared to Bacchus Marsh, then in 1945 he was cleared to Echuca Football Club.
While at Bacchus Marsh Monty was a Signaller and Intelligence man for the Volunteer Defence Corps. His service number was V361361.
(Trove; Age July 26 p6)
Monty enlisted at Ballarat.

1939 November 04 the Melton Express (p2)
"Mr. Montague Brown, at present on the teaching staff of the Box Hill Boys High School, and son-in-law of Mr. H. W. Charlton of Bacchus Marsh, h
as been appointed to the Bacchus Marsh Higher Elementary School, where he will take up his duties next year.
Mr. Brown is a footballer of note and has played with Carlton in the Melbourne League."

http://nla.gov.au/nla.news-article116610566
Monty was on the staff of the Echuca Technical College and departed Echuca in December 1948.

"School teachers' transfers and promotions for 1945 have had early notification this year.
Changes will involve Bacchus Marsh in the loss of Mr. Monty Brown, who has been promoted to Echuca Technical School.
Mr. Bert Butler, well known locally for his prowess at football and tennis, will be the new teacher at Bacchus Marsh H. E. S."
(Express Mellton Nov 25 p2)
Is this Carlton's Bert Butler whose last game for the Blues was in 1944?

In 1949 Brown received a promotion to the Bendigo School of Mines.
(Express Melton Jan 08 p1)

In November 1952 Monty gained a promotion to that of lecturer at the Ballarat Teachers' Training College.
(Express Melton Nov 08 p1)

Brown passed away as the result of an accident, on the 31st December, 1976 aged 63 at Buderim QLD formerly of Frankston Victoria and PNG (Papua New Guinea)

There was a renown Melbourne artist by the name of Montague Brown who died aged 72 on December 24 1943 at his home "Murrumbeena," which was in Neerim Road Murrumbeena Vic.
He left a widow but no family, perhaps he was a relation?