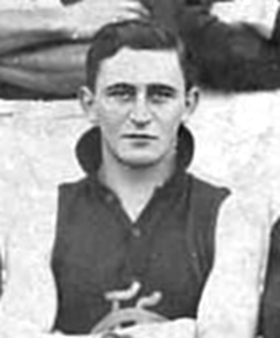 
Raymond John Brew was an outstanding footballer who captained and/or coached the Blues in six of his nine seasons at Princes Park. Originally a forward, he transformed himself into a dashing defender in the latter stages of his career, only to be forced into premature retirement by a serious knee injury at the age of just 28. Although his playing career had ended, he continued to serve the club in a variety of administrative roles including Vice-President and club solicitor.

Born in West Melbourne in 1903 to devout Irish Catholic parents, Brew’s path to Princes Park led from school football at St. Mary’s primary school, through West Melbourne CYMS to St Kevin’s College, where he won a scholarship to study law at Melbourne University. Apart from his exceptional football talent, he also shone at athletics, handball and cricket. Carlton’s scouts first noticed the stylish half-forward when he was representing St Kevin’s, and invited him to trial with the Blues over the summer of 1922-23.

Brew stood out in those early trial matches, so it was only a matter of time before he was called into the senior team. The special moment came on May 19, 1923, when the Blues met Richmond in a round three clash at Punt Road Oval. Wearing guernsey number 26, Brew was thrown in the deep end as a follower (or ruck-rover) on that Saturday afternoon, and withstood a physical baptism to earn immediate respect. By no means intimidated, he rammed through a goal with his first kick, and Carlton beat the Tigers by eight points. Brew played all the remaining games of 1923, and 12 more in 1924, as the Blues languished near the bottom of the ladder in a forgettable time for the club. Even so, Ray’s emergence as a VFL star was confirmed when he was selected in the Victorian squad for that year’s Australian Football Carnival in Hobart, and the Vics won the championship.

Meanwhile, discontent and disharmony was rife at Carlton, as was obvious when the club’s captain Maurie Beasy, and playing coach Paddy O’Brien both resigned their positions after Carlton was trounced by Essendon at Princes Park in May, 1925. Brew was vice-captain by then, and the obvious choice as next leader. However, the club committee went one step further than that. They asked him to step in as captain-coach on a caretaker basis, while they launched a search for a more permanent solution. Ray accepted the challenge (becoming one of the youngest-ever VFL captains at just 22) and marshalled his shaken team to one win in four games before former South Melbourne Premiership captain Jim Caldwell took over the coaching duties in mid-June.

The Carlton players responded positively to Caldwell, and climbed off the canvas in the second half of the year to end up ninth on the ladder, with five wins. Caldwell was considered to have done all he could in the circumstances, and was offered the job of coaching the Blues again in 1926 – only to shock the club by declining in favour of the large pay cheque and more settled conditions on offer at Rutherglen Football Club in the Ovens & Murray League.

So once more, the Carlton committee turned to Brew as captain-coach, and to their joy, he delivered immediate improvement. Boosted by the return from injury of champion forward Horrie Clover, as well as the emergence of another star in Harry Vallence, the Blues were suddenly a more formidable combination. Especially so when Brew stationed himself in a back pocket, and began setting up play with his long clearing dashes downfield.

Carlton climbed to sixth place on the ladder in 1926, but early in the following year, Brew suffered a burst appendix that he was lucky to survive, and kept him from playing for twelve months. Horrie Clover stepped in as caretaker coach, leading the Blues into the 1927 finals, and a heart-breaking 6-point Semi Final loss to Richmond – before Brew was well enough to return in 1928.

At one stage early in 1928, Carlton sat atop the ladder with a percentage of 182.9%, before reality kicked in and the Blues wound up fourth. Brew had come back better than ever, and at the age of 25, was at the peak of his career. Week after week he demonstrated that he was a natural leader, with an outstanding ability to read the play and bring his team-mates into the game. For the second year running however, Richmond knocked Carlton out of finals contention in the first week, humbling the Blues by almost nine goals.

That second successive finals defeat by Richmond led to change again at Carlton in 1929. Brew retained the captaincy, but former Tiger Premiership captain Dan Minogue took over as coach. The momentum built up over the two previous seasons continued when Carlton finished another impressive home and away season in second place behind Collingwood, with Richmond and St Kilda as the other finals qualifiers. Horrie Clover, wingman Joe Kelly and Brew were all stars in Carlton’s nail-biting 8-point semi-final victory over St Kilda in the first week of the 1929 finals. The same trio – along with ruckman Charlie Davey – were named as Carlton’s best when Richmond cruelly beat the Blues yet again in the Preliminary Final.

No-one knew it at the time, but Brew’s last viable shot at Premiership glory came in 1930 when Carlton once again qualified second behind Collingwood. Facing Geelong in a Semi Final, the Blues fell into the trap of gambling on unfit players, and paid the price. Brew himself was suffering from a torn rib cartilage, yet insisted on leading his team into the game and his bravery was misguided. Pain forced him off the field at half time, as his dreadfully inaccurate team kicked 8.21.69 in losing to the Cats (13.11.89) by 20 points.

The very next time that Brew pulled on his navy blue guernsey to play Geelong – at Corio Oval on Saturday, May 23, 1931 – proved to be his last VFL game. On the way to another narrow defeat by the Cats, Ray tore ligaments in one of his knees. The medicos of the day couldn’t repair it, and one of Carlton’s finest was forced into premature retirement at the age of just 28.

During his nine seasons of VFL football, Brew graduated in law from Melbourne University, and was just 23 when he became a partner in the law firm of Nicholas O’Donohue and Co. Renowned as a man of honesty and integrity who would work without a fee for just causes, he is said to have turned down a promotion to the bench because he was deeply uncomfortable with the responsibility of passing judgement on people.

A Bluebagger from the moment he set foot in Princes Park, Ray Brew served as Carlton’s honorary solicitor for many years, and was Vice-President of the club from 1932 to 1934.

One notable student publication, Newman: the annual magazine of the Newman College Students' Club was published in the period 1919-1992 and from this magazine we have learnt that in 1925 Ray Brew, LL.B. Entered College 1921. on the General Committee in 1923-24. Editor of the Magazine in 1924.First XI cricket in 1924, Athletics in 1921-2-3-4. 1st XVIII Football 1921-2-3-4. Captain of latter 1923-4. Good all-round sport. Putter of some capacity. Weighty and clever footballer of Carlton fame, and represented Victoria at Carnival games in Tasmania last year, of which he has vivid memories. Good debater and generally popular. Had happy knack of defeating the examiners with minimum amount of effect. Earned and deserved cognomen of ‘Tubby”. In 1928 Ray Brew, offers football worries and an extensive practice as his excuse for deserting us and in 1929 Ray Brew, Carlton’s famous captain, and Nick O’Donohue, are well known city solicitors, but are rarely seen at College functions. 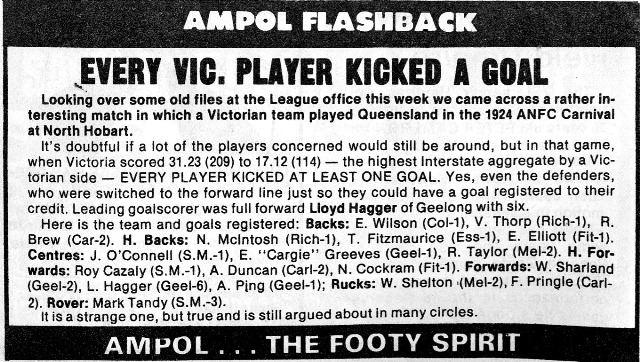 At the 1924 ANFC Carnival in Tasmania, Brew represented Victoria in an extraordinary game against Queensland, during which every Victorian player kicked at least one goal. The game wasn’t one-sided – Queensland scored a respectable 17.12 (114) to Victoria’s mammoth 31.23 (209) – but defence was not a priority and players were switched from defence to attack throughout the match. After starting in a back pocket, Ray ended the game with two goals, as did Carlton’s two other representatives, Alex Duncan and Fred Pringle.

In 1930, Brew was rewarded with Life Membership of the Carlton Football Club for eight years’ service as a player. He had been captain for five of those years.

Not long after his last game for Carlton, Brew purchased part-ownership of the Prince Of Wales Hotel in St Kilda, and he lived there until he enlisted for service with the Australian Army during World War II. He served with the Army Legal Corps at Keswick Barracks in South Australia for most of the war years, with the rank of captain. While in SA, he met his future wife Jean, and together they raised two children.

Ray also maintained a life-time interest in horse racing. He owned a number of successful thoroughbreds including Pushover, the winner of the 1956 Adelaide Cup.