Carlton lost to St Kilda by 13 points at Princes Park.

A crowd of 2,000 ruffians mob the umpire after Carlton lose to St Kilda by 13 points. The League has been called upon to give more protection to umpires. - 100 Years of Australian Rules Football.

In a hard fought match St. Kilda got the early break. The Blues' skipper Billy Dick kept the Saints crack forward McNamara quiet for most of the game. The visitors led by 13 points at half time, but the Blues hit back and got within 3 points at the last break. The Blues hit the front in the final quarter but McNamara scored 2 late goals and the Saints ran out winners by 13 points.

The Leader newspaper (May 09) writing about the crowd invasion and said of the fence; "The Carlton officials took no steps to prevent the disorderly element intruding on the arena, beyond erecting a new fence in place of the old rickety structure that used to do duty over 40 years ago in a different part of Princes Park. The new fence, judging by results, does not seem to be much of a barrier in checking larrikins instincts. What is really required is a trooper or two patrolling the ground, as the foot police are useless in a combined rush. The authorities, however, have learnt their lesson, and there should be no fear of recurrence of the unseemly disturbance."
The old fence referred to was the movable fence that was at the old ground called Princes Oval, near the University. This fence had to erected before every football season and removed and stored at season's end.

"The crowd of the day assembled at St. Kilda/(Carlton), some 25,000 barrackers, whose behaviour at the termination of the game was disgraceful. The umpire was brutally assaulted, and the ladies! did their little best to disable the players as they returned to the dressing rooms after the fray. The weapons used was the useful umbrella. It seems that players and umpires will have to be protected by the militia, and a subway built from the centre of the ground to the pavilion."
(Trove: Public Opinion May 07 1914, p21)

At the end of this round Carlton were in 7th spot on the ladder with a percentage of 87.5. 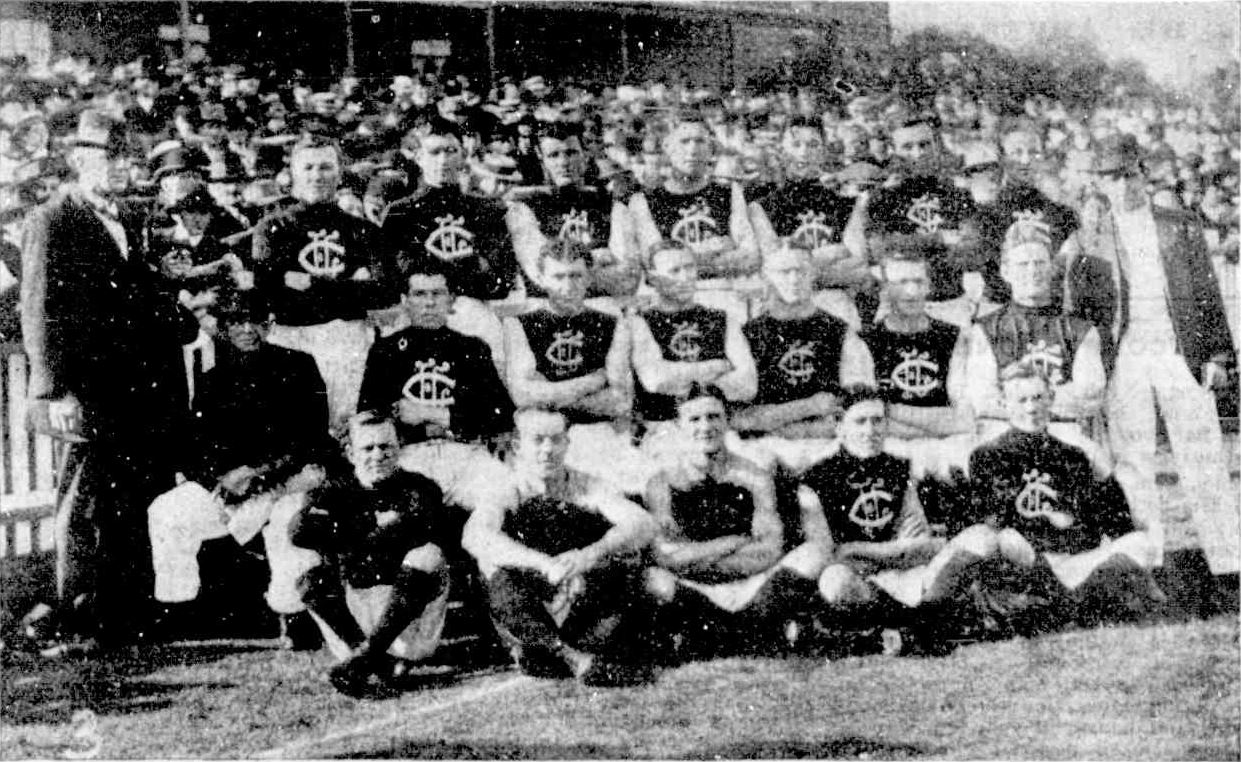 Far left; Possibly Viv Valentine roving to the pack. Could be George Calwell running in