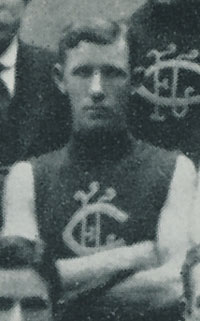 A classy defender from Cheltenham, John Stephen ‘Steve’ Leehane played six valuable seasons for Carlton during World War 1. He was one of the Blues’ best at half-back in our 1914 Premiership victory over South Melbourne, and almost certainly would have made it two flags in a row had he not been struck down by a season-ending groin injury only a few weeks before the 1915 finals.

Horsham born Leehane was granted a further chance at glory when Carlton contested our third straight Grand Final in 1916. A week beforehand, the Blues had defeated Fitzroy by 23 points in the Preliminary Final, but in the process had lost key players to injury. Fitzroy then caused a huge upset when they knocked over the Blues by almost five goals in the challenge Grand Final. Leehane played at full-back that afternoon, and provided one of the few positives for his team by keeping Fitzroy’s full-forward Horrie Jenkin to a handful of possessions and just one goal.

Leehane went on to enjoy finals football in each of his remaining three seasons at Princes Park, although he never again experienced the heady atmosphere of Grand Final day at the MCG. He retired after kicking the last of his 14 career goals in Carlton’s 18-point loss to Collingwood in the 1919 Semi Final, but his impact on the VFL was far from over.

Steve’s sons Edward (Ted) and Tom later played Australian Rules Football at the highest level – although Carlton’s fierce rival Essendon was the main beneficiary. In a glittering career interrupted by World War II, Ted was a member of the Bombers’ 1942, 1949 and 1950 Premiership teams. A strong-marking forward, he kicked 140 goals in 83 games between 1942-43 and 1946-50.

Tom Leehane followed his father to Carlton in 1948, but played only a single game in navy blue. Two years later, he joined Ted at Windy Hill for another seven senior matches.