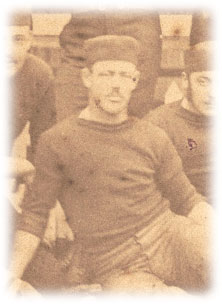 1877 A sturdy and speedy player, and follows with unflagging zeal; has rendered himself throughout the season.
(The Footballer. 1877. p36)

1878 In a steady and unassuming style of play, unflavoured by fortunes chances, has done good service, as good as ever in speed and perseverance.
Won First Twenty drop kick with 57 yards.
(The Footballer. 1878 p31)

Above, George Smith (Carlton) is pictured in a montage of footballers surrounding the late George Coulthard's image
G. Smith scored 3 goals during the 1878 season.
(The Footballer, p75 1878)

G. Smith played in both Carlton-Waratah exhibition games (Rugby and Australian Football) at the M.C.G. on June 29 and July 1 1878.

1879 Active and speedy, quick at dodging, is a most reliable player. In a most deserved manner has won a fair share of the laurels.
(The Footballer 1879. p29)

1881 (Sterling Geordie) "Forward Carlton" is the motto here, a feeling combined with excellent back play is worthy of imitation, has rendered his club the very acme of good service.
(The Footballer. 1881. p24)

G. Smith was a member of Carlton touring side to Adelaide in 1881.

George Smith was mentioned amongst players to have given great service in 1881.
(The Carlton Story, H.Buggy and H.Bell, p51,57)

Richmond Football Club poached George Smith from Carlton to give experience and off field leadership to the fledgling club.
(The History of The Carlton Football Club, Brian Hansen p64.)
He was the first captain of Richmond.
The photograph of George (below) was taken in 1885 and is part of group picture presented to the Richmond secretary on completion of their first season. 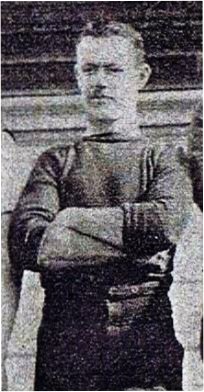 Former Blue champion George Smith (standing) was the inaugural captain of Richmond in 1885. An enlargement from a lithograph image courtesy of Trevor Ruddell, M.C.C. Library. A black and white version of this image appears in Alf Batchelder's "Pavilions In The Park." This is believed to be from 1888 as Smith retired at the end of that season. See the 1888 page for a full view of this picture, and the 1889 page for the 15 V.F.A. players labelled as "Champion Footballers"
The black and white image on the right is of George Smith taken from the Richmond team photo of 1888. George is wearing a new guernsey.
This image is courtesy of MCC Library; Jubilee: History of Richmond Football Club 1885-1934
Origins of Australian Football Vol 3 - Mark Pennings

1891 June 20
The Australasian writing about an old players match on the M.C.G.
"When, for instance, the still fearless Geo. Smith of Carlton hurled his modest 10st. deliberately at the immense abdominal development of Malcolm Taylor, and rebounded therefrom with as much force as if he had tackled the buffer of a fast-advancing locomotive ...."

1905 May 31
George Smith, a cricket bat maker of 17 Stewart Street Richmond, passed away at the Alfred Hospital aged 51.

1905 June 05
Round 5, 1905 at the Carlton vs Geelong match at Princes Park, flags flew at half mast as a mark of respect for George Smith.

"Kickeroo," the football contributor of the the "Herald," writes;
Mr. George Smith, one of the old school of football, was lying at the point of death in the Alfred Hospital last Saturday, but his mind was on the East Melbourne ground. "Dave," he said to his son, the dashing follower of Essendon, "Go and play today for the old team. They might want you badly against South Melbourne," Dave went to the match, in obedience to the paternal injunction, and played remarkably well, weighed down as he was by the thought of his father's critical condition of health. I have to record, with a feeling of deep regret that Mr. Smith died on Wednesday. (Euroa Advertiser June 09 1905 p3)