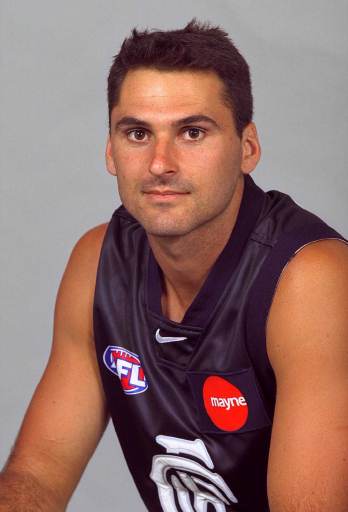 
Trent Hotton was a promising tall utility who spent two years at Collingwood before being sacked for disciplinary reasons in 1996. Four years later, he was offered a second chance by Carlton, and repaid the Blues with 61 honest games over three seasons.

Originally from Warragul in Gippsland, Hotton moved to Melbourne in his teens to take up University studies. He joined the Preston Knights, where his ability at the elite level for 18 year-olds impressed Collingwood’s recruiting team, and he was drafted by the Magpies at number 28 in the 1994 AFL Pre-season Draft. Strong and versatile, he played in a variety of positions during his 17 matches, including the 1994 Qualifying Final loss to West Coast. But his time in black and white was also marred by a couple of incidents that eventually led to his departure.

In November 1996, Hotton and two of his team-mates; Jonathon Ross and Aaron James, were charged by police after a late-night altercation in a Melbourne nightclub. Ross was fired by the club, while the other two were fined, and placed on strict probation. Then early in the following season, prior to the opening round, Magpie coach Tony Shaw announced to the media that he had sacked Hotton on the spot for turning up to training affected by alcohol.

With those black marks against his name, Hotton decided to leave Melbourne, and in 1998 he signed with South Adelaide. He spent just the one season in the SANFL however, before returning to Melbourne to play for East Burwood under the coaching of another former Magpie, Alan Richardson. Meanwhile, Carlton’s match committee had been urged to take a good look at the 25 year-old, and during the 1999 pre-season he was invited to play in two trial matches at Princes Park. In one of those games, he took a dozen marks, and the Blues interest in him stepped up a notch.

Hotton went on to star for East Burwood when the Rams swept to the Eastern Districts Football League Premiership, before his name was called with one of Carlton’s last picks (no. 86) in the 1999 National Draft. The Blues were an enduring AFL power (having lost that season’s Grand Final to North Melbourne) and Hotton’s recruitment became a real talking point – was he better than Collingwood realised, or was Carlton wasting their time and effort with him?

The answer was yes, and no. Trent was a surprise packet for the Blues in the last season of the 20th century, and didn’t miss a game. Regularly used as a relief ruckman or extra tall forward, he had a day out against his former club in round 18, 2000 kicking five goals in Carlton’s demolition of the Magpies at Princes Park. In September he played throughout Carlton’s finals campaign, and was a key defender in the Blues’ Preliminary Final loss to Essendon. Another good season and more finals appearances followed in 2001, until the year ended in a heart-breaking Semi Final loss to Richmond.

In 2002, Carlton hit a brick wall after Stephen Silvagni retired and Anthony Koutoufides wrecked a knee. Hotton was selected only once in the first six rounds, but eventually played 14 games in a wretched season that saw the Blues plummet from finalists to wooden-spooners for the first time in club history. In the aftermath, coach Wayne Brittain lost his job, along with a number of players - including Hotton. Having worn guernsey number 37 in an average 20 games per season since his arrival, Trent could rightly have been considered unlucky - but the shame of Carlton’s spectacular demise made casualties inevitable.

When his AFL career finally ended, Hotton was cleared to Mansfield in the Goulburn Valley Football League, where he became one of the Eagles’ greats. Playing alongside his brothers Cameron and Justin for a number of years, Trent captained Mansfield into the 2004 Grand Final against Tatura and was proclaimed Best on Ground in a comfortable victory. Three seasons later in 2007, he won the Morrison Medal as GVFL Best and Fairest.

Hotton was still playing at 36 years of age in 2010, when he saddled up with East Malvern in the Southern District Football Netball League. In 2012, he won another flag when the Panthers triumphed in the Division 2 Grand Final.