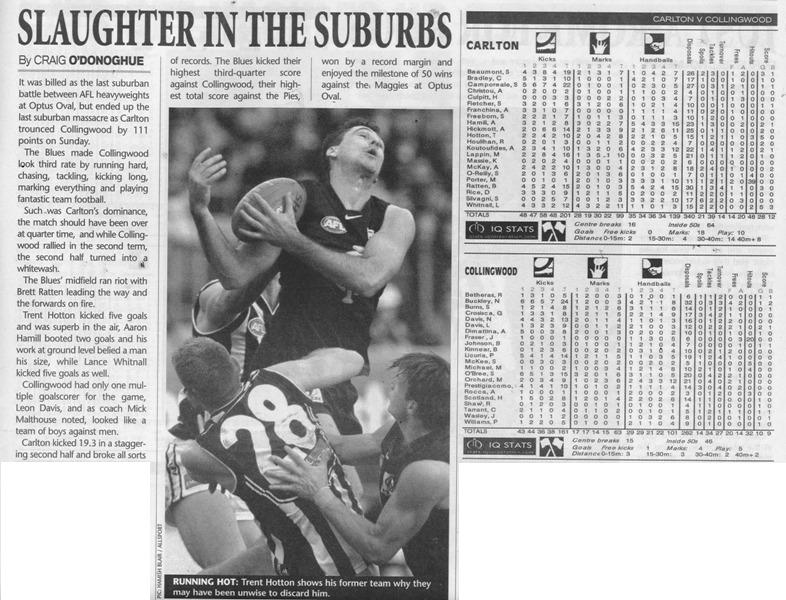 The magnificent Old Dark Navy Blues sent their horde of supporters into rapture by crushing the detested Magpies in this memorable game at Princes Park - a game that came about as a result of some deft negotiating between Carlton President John Elliott and the AFL.

Although we could have seated far more fans at the MCG, Elliott wanted the game played at our fortress and the result was one of the most memorable days in the long history of the CFC - a 28-goal jamboree by a red-hot Carlton team, with 'Big Red' Lance Whitnall, and Collingwood discard Trent Hotton chopping up the Magpie defence and kicking five goals each.

It is hard to rationalise the fact that the results would almost be perfectly reversed only two years later, when the Pies pummelled Carlton at the MCG by 108 points on their way to a Grand Final. Carlton's fall from grace in 2002-2005 was as sudden as it was predictable, but in 2000 we were still riding the wave of success on a core of stars in Ratten, Koutoufides, Bradley, Whitnall and Lappin.

Score Records: This remains Carlton's highest ever score and greatest winning margin against Collingwood.
Score Records: This win was the last in a run of 13 wins in a row, Carlton's third best winning streak on record. However, Carlton is yet to have more than 4 successive wins (as at the time of writing - subject to being tested in 2016 ).
Interesting Fact: This was also the last time Carlton hosted Collingwood at Princes Park/Optus Oval.
Interesting Fact: Our 11 goal third quarter, the third time we'd managed 10 goals or more in a quarter during 2000, would be our last double digit goal scoring quarter until 2010!