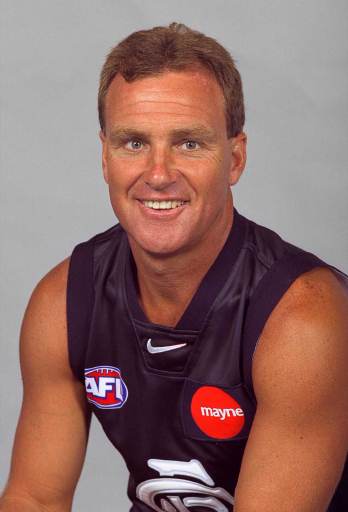 Despite his credentials and his undoubted passion for the game, football has not always been kind to Wayne Brittain. A career coach who himself never played at elite level, his knowledge, tactical sense and management skills took him to the top job at Carlton in 2001, after a long apprenticeship under two of the greats in Robert Walls and David Parkin. However, circumstances conspired against him, and in 2002 Brittain became the first coach in the Blues’ long history to be awarded a wooden spoon. Shortly afterwards, he was sacked with a year remaining on his contract.

Born in Melbourne, Brittain grew up in Cairns, after his family moved north in 1978 following the tragic early death of his father. Billy Brittain had played Under-19 football at North Melbourne before his untimely passing, and had instilled a love of the game in his three sons; Michael, Wayne and Craig.

The youngest of the clan, Craig, showed the most promise and was vice-captain of the 1980 Queensland Teal Cup (Under-18) team. Later that year, he relocated to Brisbane to play in the QAFL with Windsor-Zillmere. Michael and Wayne later joined him, in time to celebrate the Eagles’ 1981 Premiership. Craig was then recruited by North Melbourne, and eventually played five senior matches for the Shinboners before returning home in 1985.

Meanwhile, Wayne had suffered debilitating knee and back injuries, forcing his retirement from the field. So he took up coaching with the Windsor-Zillmere Under-19 side, and while Craig was chasing his dreams in the VFL, Wayne found almost instant success. Under him, the Eagles’ thirds and Reserves both won Premierships, and in 1985 he was appointed the club’s senior coach. The Eagles promptly won another QAFL flag in 1988, and were perennial finalists for the next seven years.

Those achievements didn’t go unnoticed, and in 1994 Brittain was head-hunted by Brisbane Bears coach Robert Walls. The following two seasons with the Bears saw little success, but provided a steep learning curve. Then in 1996, when Carlton was looking for an assistant for David Parkin, Walls not only urged Brittain to apply, he contacted the Blues himself with a ringing endorsement. Late that year, Brittain packed his bags for a new life in Melbourne.

Brittain's time as assistant coach at Carlton lasted five years, during which he earned respect as an excellent communicator and game-day tactician. By 2000, Parkin had so much confidence in his assistant that he handed over the tactical responsibility during matches on a regular basis. It was a method deemed unusual - however, when the Blues (powered by an incredible season by Anthony Koutoufides) won 13 games in a row, and made the Preliminary Finals, it was safe to say that it worked. At the end of that season David Parkin ended his long tenure at Carlton, and anointed Wayne Brittain as his successor. Brittain was contracted for three years, after rumours had him refusing a higher-paying position at St Kilda. 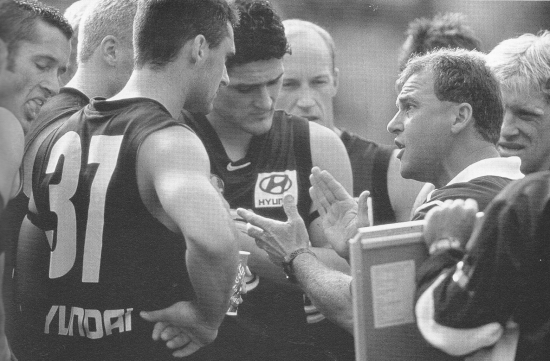 Brittain’s first season was reasonably successful, even though power forward Aaron Hamill had left the Blues during the off-season for a higher paying gig at St Kilda. An injury-hit Anthony Koutoufides could not reach the heights of his previous year either, but Carlton was still competitive – as notable victories over the 2000 premiers Essendon (twice) and 2001 premiers Brisbane demonstrated. Still, the Blues fell short, losing a Semi-Final against Richmond, and prompting Brittain to declare the year as a waste.

Sadly, season 2002 was nothing but an unmitigated disaster on all fronts for the Carlton Football Club, and for Wayne Brittain personally. No-one had tipped the Blues to slide as badly as they did, until the team was decimated by injury and the players’ confidence eroded to the point of despair. In many conversations it was argued that the team wasn’t as fit as it needed to be, and that the massive hole left in the backline by the retirement of Stephen Silvagni the year before had proved impossible to fill.

So, as the season drew to a close, it was clear that Carlton was about to be presented with the club’s first-ever wooden spoon. The vicious glee from opposition supporters was hard to stomach, and the mortified Carlton masses wanted blood. The two club identities who bore the brunt of supporter wrath were President John Elliott and coach Wayne Brittain.

Although Elliott’s position was under enormous pressure, he wasn’t about to resign. Hoping to shore up his support, he sacked Brittain before the year was out, and appointed former North Melbourne Premiership coach Denis Pagan in his place. Rumours abounded that Pagan came with a very hefty price tag, but Elliott later stated that if he had been unable to hire Pagan, then he would have allowed Brittain to see out the last year of his contract.

Despite the circumstances, the sacking of Brittain left a sour taste in the mouths of many within the club, and outside it. He was a scapegoat all right, but his exit from Princes Park was as dignified as it was necessary. He delivered an emotional farewell speech at the 2002 Best and Fairest awards night, and left for the last time with his personal reputation untainted. Later in proceedings, 2002 club champion Corey McKernan paid tribute to Brittain as the major reason he was able to rediscover his best football after transferring from North Melbourne.

After leaving Carlton, Brittain joined Richmond as an assistant to Danny Frawley, a job he held until 2004. He then returned to Queensland to coach his former club; the Zillmere Eagles – only to be controversially sacked again when he was found guilty of abusing a field umpire after a narrow loss.

In September 2009, Brittain joined the Brisbane Lions as an assistant to senior coach Michael Voss.