Carlton lost to Richmond by 11 points - MCG. Kouta did his ACL in a dour struggle at the 'G. 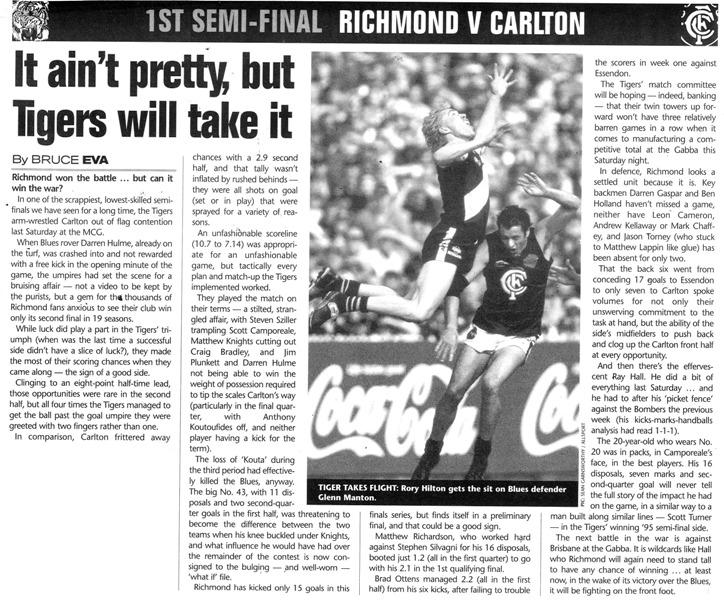 Click to expand
In a dour, low scoring, heartbreaking game, the Tigers would end Season 2001 for the Blues in this cut throat Semi-Final.

Richmond always seemed to be in control of this match, keeping Carlton goalless in the first quarter, while scoring 2 goals. A 5 goal to 4 second quarter would reduce the half time deficit to 8 points. But a 3 goal to 1 third quarter would give the Tigers a vital 15 point lead at the final change. Carlton had its chances in the second half but would kick a wasteful 2.9, while the Tigers kicked 4 straight, to run out 11 point winners and end Carlton's finals hopes.

A serious knee injury to Anthony Koutoufides in the third quarter was a major blow to the Blues' chances as Matthew Knights fell across his knee in a scrum typical of this game. Kouta would not only be out for the rest of this game but would miss most of 2002.

Stephen Silvagni, in his final game, would still manage to restrict Richardson to just one goal, and Mark Porter would play his final game for Carlton before moving on to the Kangaroos. On the positive side, Andrew McKay provided plenty of drive from half back with 21 possessions.