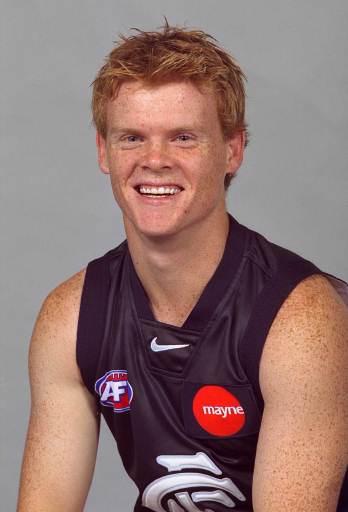 Jimmy Plunkett was a small right-footed inside midfielder with the ability to find the ball. Wearing the #40, Plunkett would come to Carlton through the Rookie Draft, after being delisted by the Bulldogs after 10 games through 1999 and 2000.

Plunkett, a red-head, would play 15 games in 2001 including a magnificent 34 possession game against the Crows in the finals. With 22 kicks and 12 handballs, Plunkett - or simply "Jimmy" or "JP" as he was known, was dynamic as the Blues crunched the Crows with Whitnall and Lappin also starring. Although we lost to the Tigers in the following week, Plunkett's performance was eye-catching and we thought we had stolen a centreman through the Rookie List.

Plunkett played 18 games in 2002, with a number of high possession games (up to 24 on 3 occasions), although he had a few low ones also.

Plunkett did not have the size or pace of your standard AFL player, he earned the ball through burrowing in and out of packs. Good with his hands, Plunkett also had a limited kicking distance.

Incoming Coach Pagan did not seem to see the merits of Jimmy in 2003, keeping him in the VFL for all but 4 games (2 as a late replacement), and when he was selected for Carlton, he received minimum game time and had minimal impact. Plunkett would continue to perform at VFL level, but he was the sort of player who was caught with the ball so often - through getting it in the first place but not getting rid of it quick enough. Plunkett was released at the end of 2003.

Off the field, Plunkett was also famous for starring in the "Avagoodweegend Mr Walker" Aerogard commercials in the 1980s as the little boy with former Test Fast Bowler Max Walker.

Plunkett was originally recruited from Montmorency.