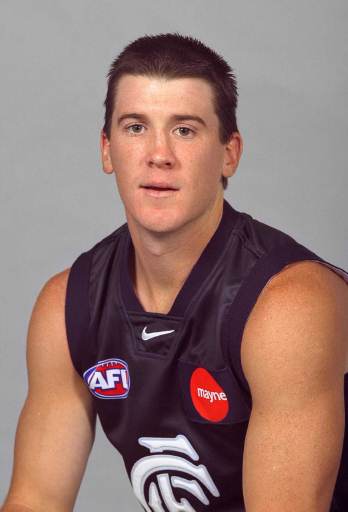 A slimly-built flanker or winger who was an honest contributor for the Navy Blues over five seasons at the turn of the century, Simon Fletcher came to Carlton in 1998 after he was discarded by Geelong. Originally from Grovedale, he had been playing for the Geelong Falcons in the elite Under-18 TAC Cup when the Cats claimed him under the father-son rule in place at the time.

Remarkably, Simon’s father Gary had never played at VFL/AFL level, but the father-son rule was still deemed valid because Gary had spent a number of years as the team manager at Geelong. Simon played some good football at Reserves level for the Cats without managing to break into the senior side, until he was delisted in 1997 after a knee injury ruined his season.

Meanwhile, Carlton had been keeping tabs on the 19 year-old, and offered him a place on the clubs’ rookie list in 1998. Grateful for a second chance, Fletcher responded with enthusiastic honesty. He impressed during a solid first year with the Blues’ Reserves, and was elevated to the senior list in 1999 before making his AFL debut off the interchange bench against Essendon at the MCG in round 16 of that year. Although Carlton was pulverized by the Bombers, and Simon’s stats were modest, he improved week by week and was retained in the side right through to that glorious afternoon when the Blues exacted revenge with a sensational victory over Essendon in the 1999 Preliminary Final. The following week however, Fletcher was left out of the Grand Final side – to make way for Adrian Hickmott – and could only watch on as his team fell to North Melbourne. By then he had been awarded the dual honours of Best First Year Player as well as Reserves’ Best and Fairest, but that did little to ease the disappointment at missing out on playing on the biggest stage of all.

By 2000, Simon was an established senior player and appeared in all but one of the home and away games. Carlton finished second on the ladder, only to suffer a shock Qualifying Final loss to Melbourne and set the stage for another Preliminary Final clash with Essendon. This time, the Bombers were far too good, routing the Blues by 45 points on their way to that years’ flag. It was a similar story in 2001 - Fletcher played 20 of a possible 24 games as the Blues finished fifth, then crashed out of flag contention after a Semi Final defeat by Richmond.

After those three successive finals campaigns, Simon and the Blues looked forward to another competitive season in 2002 – but few could have foreseen the disaster that unfolded. Decimated by injuries to key players, Carlton won only three matches for the year and tumbled down the ladder to finish dead last for the first time in club history. Fletcher was one Blue who strove to plug the gaps, seemingly playing a different position each week in his 19 games.

Carlton underwent further upheaval during the 2002-03 off-season, sacking senior coach Wayne Brittain and discarding long-time President John Elliott in the wake of an AFL investigation that uncovered serious salary cap breaches at the club. The heavy fines and draft penalties that followed bombed the Blues back to the Stone Age, and crippled the club for a decade. Under their new coach Denis Pagan, the team won only four matches in 2003, and avoided a second wooden spoon by a bare two points. Fletcher was overlooked through the first eight games of the year, but eventually earned a recall to play another 11 matches. Sadly, his season (and his career at Carlton) culminated in one of the blackest days ever for the Navy Blues, when North Melbourne slaughtered a dispirited Carlton by 124 points at Docklands Stadium in round 22.

After that, Fletcher was one of seven senior players who either retired or transferred to other clubs at season’s end. In 2004, Simon found a new home at Richmond, where Wayne Brittain had been appointed as an assistant coach. Fletcher made another six senior appearances for the Tigers – mostly in defence – before he, Brittain and senior coach Danny Frawley were all told that their services were no longer required. Having played 90 games (including eight finals) and having kicked 30 goals, Simon’s AFL career ended before his 27th birthday, but few could deny that he had made the most of his ability.

After leaving Punt Road, Fletcher joined Geelong Football League club St Mary’s in 2005, playing with them until 2009. The following year, he relocated to Queensland and returned to the AFL in the role of Player Development Manager with the Gold Coast Suns – a position he continues to hold ahead of season 2015.

Fletcher wore guernsey number 31 throughout his five seasons at Princes Park. Beforehand, it had been worn briefly by Mick McGuane, and was passed on to Jordan Bannister when Simon left Carlton in 2003.

At training one night in either 2002 or 2003, Fletcher won a kicking competition when he landed a football directly into a wheelie-bin from 45 metres. There was no doubting his foot skills.

During his first couple of seasons in Queensland, Fletcher continued playing at State League level with the Burleigh Bombers.

Nicholls, Armstrong & Hurst in the shower.