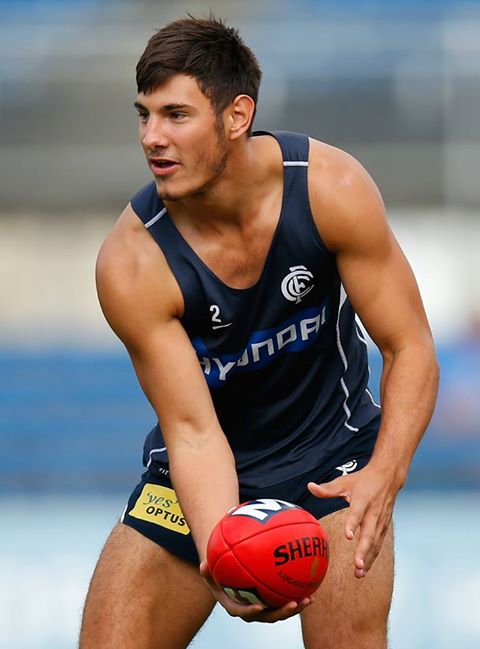 Troy Menzel was recruited with the Blues' first pick (number 11) in the 2012 National Draft, from SANFL club Central Districts. The younger brother of Geelong's Daniel Menzel - who had been a blossoming star for the Cats before he was struck down by his third serious knee injury during the 2011 finals - Troy was a left-footed medium forward with outstanding goal sense. He kicked nine goals against Tasmania and another six against NT in the first two games of the NAB AFL Under-18 Championships in 2012, before a groin injury interrupted his season. Earlier that same year, he had starred for the Australian Under-18 team on their European tour, and was a regular contributor at senior level for Central Districts before being drafted by the Blues.

Menzel underwent LARS surgery on his right knee as a 16-year-old. While at Carlton he didn’t have any major concerns with the artificial ligament, although he remained very aware of the breakdowns that other players in a similar position (like Melbourne’s David Rodan and Sydney’s Nick Malceski) had had, so he continued to rely on the advice of renowned knee specialist, Professor Julian Feller.

After joining Carlton, Troy hit the ground running, and a string of eye-catching games in the VFL for the Northern Blues throughout April 2013 demanded his senior selection for the first time in round 8 against Port Adelaide at Docklands. Sent into the game late as the Blues' substitute, Menzel immediately laid a strong tackle, setting up a sensational goal by Mitch Robinson, and ultimately, victory by 18 points. He went on to play another six matches for the season (kicking multiple goals in four of them) and completed his debut year in front of an enormous crowd of 94,000 in Carlton’s great Elimination Final victory over Richmond at the MCG.

In 2014, Carlton celebrated the clubs’ 150th anniversary, and the team approached the year confident of again playing finals football. But four straight losses kicked off the season, and the Blues never gave a yelp in finishing a deeply-disappointing 13th on the ladder. One of the few bright spots in a bleak year for supporters was the form of Menzel, who stepped up when needed and became a real weapon in Carlton’s attack. Although he was hampered by a damaged shoulder in the later stages, Troy played 19 games for the year and kicked 26 goals – an excellent return considering that only six of those matches resulted in victory for the Blues.

In Carlton’s nail-biting win over West Coast at Docklands in round 6, Menzel kicked the winning goal with two minutes left. A fortnight later, he booted three majors in a brilliant second term against St Kilda, and in early July he was nominated for the AFL Rising Star award when he had another big day against the Saints - taking eight marks, kicking two clever goals, and setting up a third. Soon after that, Carlton gave their long-suffering fans a lift with the announcement that Menzel had signed a two-year contract extension.

The Blues began 2015 in a buoyant mood, only to lose three of their first four matches in another horror start to a season. Senior coach Mick Malthouse was sacked half-way through the year, and the ragged Blues went on to pick up the club’s fourth wooden spoon this century. Early on, Menzel suffered a calf injury, followed by a heavy knock to his rebuilt knee. As a consequence, he was in and out of the side for much of the year as he tried in vain to recapture his best form. Four goals from 15 possessions against Geelong in round 8 was a fine effort, but overall his return was a meagre 14 games and 13 goals.

Carlton’s situation could not be tolerated, and by October 2015, the Blues were in the midst of a major cleanout. Just about all of the previous seasons’ coaching panel - along with a dozen players - had already departed when the club announced that Menzel too was on the move, having been traded to Adelaide in exchange for midfielder Sam Kerridge and National Draft selection 28. Menzel once back in his home state didn't have the impact he or the Crows were hoping for, he didn't manage a senior game in 2016 and only played 4 games for 3 goals in 2017 before he was delisted at the end of the season.

2018 - Menzel would head back to play with SAAFL club Golden Grove Amateurs.