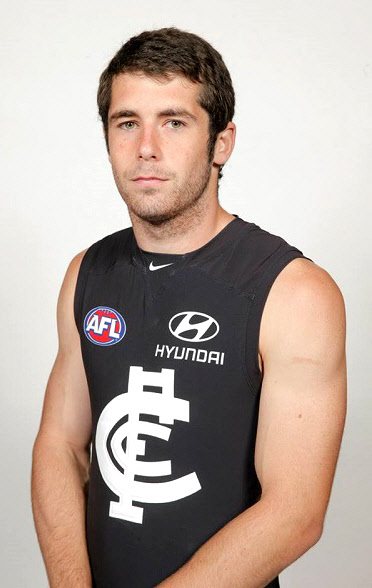 
Carlton recruited 18 year-old West Australian Blaine Johnson at pick 43 in the 2013 Rookie Draft. A lively, medium-sized forward who marked strongly on the lead, he was a thumping right-foot kick either on the run or from set shots, and came to Princes Park having already played senior football with South Fremantle in the WAFL. Beforehand, he had represented Kwinana Junior Football Club and Hobart JFC in Tasmania. In his first season with the South Fremantle Colts (Under 19) team in 2012, Blaine kicked two goals in their Grand Final victory over East Fremantle. The following year, despite playing only 9 games for the season, he was named in the WAFL Colts Team of the Year.

At Carlton, Johnson was a shining light for the Northern Blues through the early part of 2014, and his potential was recognized when he was named as an emergency for the senior side in rounds 10 and 11. Shortly afterwards, in the wake of the early retirement of veteran utility Heath Scotland, he was elevated to the Blues’ senior list.

Blaine became the ninth Blue to wear guernsey number 45 in a senior match when he was named as Carlton’s substitute on debut against Collingwood in round 15. His big moment came approaching three-quarter time on that Sunday afternoon at the MCG, when he replaced Dennis Armfield and collected seven last-quarter possessions. The Blues went down swinging, but still lost their tenth match of the season by 15 points.

A fortnight later - moments before the half-time siren in Carlton’s match against Sydney - Blaine ran onto a mark thirty metres from goal, and kicked truly to bring up what turned out to be his first and only AFL six-pointer. In 2015 he switched to guernsey number 30, but managed only two more senior appearances before being advised that his contract would not be renewed. His last game for Carlton came in round 17, 2015 against Hawthorn on a Friday night at Docklands, when he was a late inclusion for the injured Troy Menzel, and the Blues were slaughtered by 138 points.

Johnson returned home to WA before Christmas, and re-signed with South Fremantle for 2016.