Rookie from the West 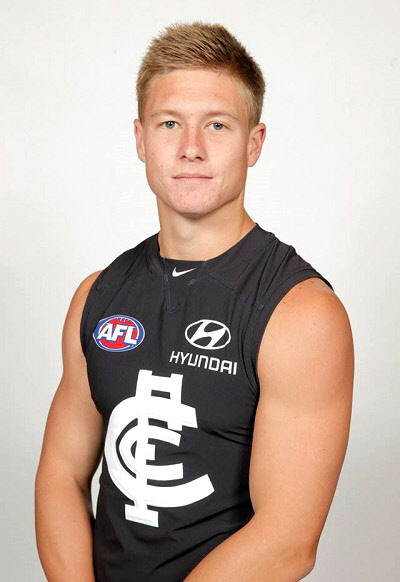 West Australian Brad Walsh was Carlton’s second selection (number 24) in the 2014 Rookie Draft. A determined midfielder who started his junior career at the Rockingham Football Club, he had captained WA at both Under-16 and Under-18 level, and played seven senior matches with Peel Thunder in the WAFL before launching his AFL career with the Navy Blues.

Regarded as a natural leader, Walsh was a tenacious inside midfielder who hunted the football and tackled hard. Prior to the draft, Peel Thunder Football Manager Brad Bootsma described Walsh as one of the most diligent and professional young players he had dealt with.

Assigned Carlton’s guernsey number 34, Walsh started season 2015 with the Northern Blues and was one of the teams’ shining lights in a dreadful season at the club. By July, Brad hadn’t missed a VFL match and was averaging 18 possessions a game in a side that was regularly being beaten by big margins. His promotion to the senior team seemed inevitable, and came at last in round 16, when Carlton travelled to his home state to play the top of the ladder Fremantle Dockers on a Saturday afternoon at Subiaco Oval. Selected as the Blues’ substitute for his debut, Brad replaced Troy Menzel during the third quarter and handled the football only briefly in a seven-goal defeat.

Things didn’t improve at all the following week, when he again started the game as Carlton’s substitute against Hawthorn at Docklands, and the Hawks smashed Carlton by a record 138 points. Walsh then returned to the VFL for a month, before he was recalled to the seniors for the second-last game of the year against Greater Western Sydney at Blacktown Stadium. Once more, Brad began the game in the red vest, and again Carlton was well beaten, but Walsh provided one of the few highlights for the sparse crowd when he kicked his first career goal with a long bomb midway through the third quarter.

For just about everyone at Princes Park, 2015 will be remembered as the season from hell - when Carlton won only four games, sacked a coach and finished last on the AFL ladder. The Blues had bottomed out, and the only option left was to rebuild the list. As talk turned to who would be axed, Walsh seemed safe for the time being - especially when he was voted Best and Fairest for the Northern Blues. However, by late October, 16 players had either retired, been traded or delisted. Walsh was one of the last to be cut, and he headed back home to resume his WAFL career with the Thunder.