A kamikaze in Carlton's midfield... 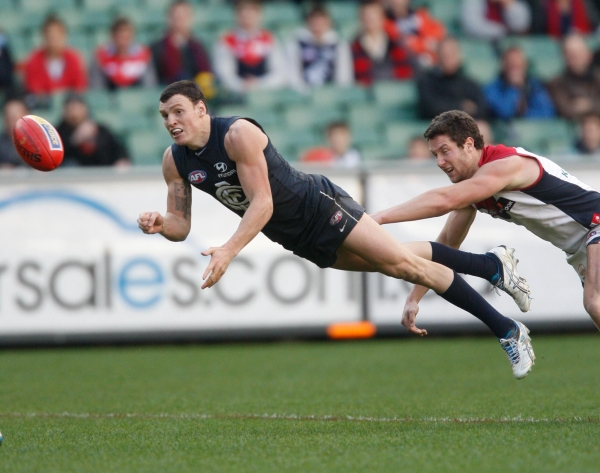 Every successful football team needs a hard nut – an individual who inspires his team with courage and aggression when it is most needed. Tasmanian Mitchell Robinson – a tenacious wrecking ball of a footballer with surprising pace and plenty of skill - filled that role with the Navy Blues for five seasons. Carlton’s second selection in the 2008 National Draft (number 40), Mitch was recruited from Tasmania’s ill-fated Tassie Devils, who had represented the Island State in the VFL from 2001, but were destined to disband that very same year. Beforehand, he had spent a season with West Adelaide in the SANFL after playing throughout his formative years with the Lauderdale Bombers, based in Hobart.

Carlton wasn’t the only AFL club to sit up and take notice when ‘Robbo’ starred for Tasmania in the 2008 Under 18 championships. Playing in the midfield, he won the Hunter Harrison Medal as the best player in Division Two, and his prolific ball-winning didn't abate when playing against the Division One teams. His straight running, aggressive tackling and accurate kicking saw him awarded All Australian selection, and a place in the plans of Carlton’s recruiting manager Wayne Hughes. Hughes said later that the Blues were both surprised and delighted when Mitch was still available at number 40, and didn’t hesitate to pick him.

In the 2009 pre-season, Robinson made an immediate impact. Wearing Carlton’s guernsey number 12 (inherited from Matthew Lappin) his defensive pressure and ferocious attack on the football demanded that he be selected for his senior debut in round 1, when traditional rivals Carlton and Richmond met on a warm Thursday evening at the MCG. In front of 87,000, Robinson played forward for most of that entertaining match, and his six strong tackles were as impressive as his three goals.

Having helped to destroy the Tigers by 83 points, Mitch was included in Carlton’s Best and Fairest votes on debut, and went on to play in the first four games of the season. He was then sent back to the VFL for a breather - a pattern that continued right through until Round 20. After that match, he was diagnosed with a stress fracture in a foot, and that prematurely ended his season with Carlton on the verge of playing in the finals for the first time in eight years.

In 2010, Robbo had some anxious moments when his style of play was scrutinised by the Match Review Panel, but he escaped relatively unharmed and continued to progress, notching up another 16 matches and 14 goals. On the first weekend in September, he experienced the exhilaration of finals football for the first time - and the devastation of a narrow defeat - when Carlton lost a cliff-hanger Elimination Final to the Sydney Swans by 5 points.

In 2011 Carlton’s theme for the season was No Passengers, but in Robinson’s case, it could well have been No Prisoners. Beginning the year bigger and stronger, and with his remarkable self-confidence at a new high, Mitch was the Blues’ midfield dynamo; crashing packs, tackling with intent and providing a focussed aggression at the football that Carlton fans loved and opponents came to fear. He was more than just a midfield battering ram however – his aerial skills and disposal were usually first rate, and his decision-making rarely wrong.

Mitch played all but one of Carlton’s 24 matches for the year - including both finals - and his consistency saw him finish seventh in the voting for the John Nicholls Medal. He placed in the top six at in every statistical category (kicks, marks, handballs and tackles) and even the umpires showed their appreciation by awarding him 9 Brownlow Medal votes – fourth best for Carlton. His coach, Brett Ratten, called him a kamikaze, while Blues fans just shook their heads at his single-minded desperation to win the football. In October, Robbo added another feather to his cap when he was the only Blue selected in the Australian squad for two International Rules test matches against Ireland.

Statistically, Robinson’s 2012 season was more of the same; 18 matches that produced 12 goals and an average 21 possessions per game. Those bare figures however, don’t show the extra pressure and added responsibility that Mitch accepted for much of a deeply disappointing season. Week after week, Carlton’s midfield depth was eroded by injury, leading to a loss of confidence and a string of embarrassing defeats. Robbo missed three games himself because of a calf strain, and another because and an eye injury, but set the standard for tenacity at the contest whenever he was on the field.

In November, Carlton’s season culminated in a miserable tenth-place finish, leading to the dismissal of Ratten and the appointment of ex-West Coast and Collingwood Premiership coach Mick Malthouse in his place. During his days on the field for St Kilda and Richmond during the halcyon 1970s and ‘80s, Malthouse had played with a similar intensity to Robinson - so they should have had much in common. But that apparently wasn’t the case.

Although the bare statistics of Robinson’s 2013 season read well – 21 senior games and 11 goals, with an average 19 possessions, 4 tackles and 3 marks per game – he earned the ire of his coach on more than one occasion as Carlton endured a roller coaster year that began with three straight defeats, and ended with the team scraping into the finals after Essendon was disqualified in quite sensational circumstances. To those on the other side of the boundary fence, Robbo seemed overly anxious to please his new coach, and his eagerness caused glaring mistakes that began to frustrate Malthouse and Blues fans alike. Mitch was regularly on the receiving end of tongue-lashings from Malthouse during breaks in play, and was even dropped from the team for disciplinary reasons late in the year.

But his absence robbed the team of intensity, and after just one week of penance he was brought straight back in and starred in Carlton’s memorable round 21 victory over Richmond, with 25 disposals, nine marks, five tackles and a goal. Later, when questioned over the circumstances that led to Robinson’s omission, Malthouse provided on of the year’s great quotes when he said, “Robbo is the full package – he’s a great coaching tester. I will leave it at that.”

Indeed, the relationship between player and coach was stretched to breaking point in 2014, before eventually snapping for good in early August. By then, Robinson had been reported twice more, and had missed a total of five games through injury and suspension. When the round 18 clash between Carlton and North Melbourne began on a Friday night at Docklands, the Blues were languishing in 14th place on the ladder, and Mitch was about to celebrate his 100th senior game. In a gutsy effort, Carlton scored their best win of the season - but Robbo was reported for a third time, and rubbed out again for two weeks.

A fortnight later, Robinson attended Monday training with a facial injury soon diagnosed as a fractured eye socket. At first, he claimed that he had been hurt during a weekend sparring session, before confessing the truth that not only had he and team-mate Jeff Garlett defied club rules by staying out late and drinking, they had made matters much worse by becoming involved in an early morning street fight with a group of strangers outside a city nightclub.

Carlton’s administration took a dim view of Robinson’s attempted deception, and, after the Blues failed to find him a new club during Trade Week, he was told that his services were no longer required. As an unlisted free agent from that moment on, he was a much more attractive proposition to rival teams. Sure enough, in early November 2014 he was snapped up by the Brisbane Lions on a two-year contract. He was then signed as a delisted free agent by the Brisbane Lions and In 2015 he was the joint winner of the Merrett–Murray Medal as Brisbane's best and fairest, alongside Dayne Beams, Stefan Martin and Dayne Zorko.