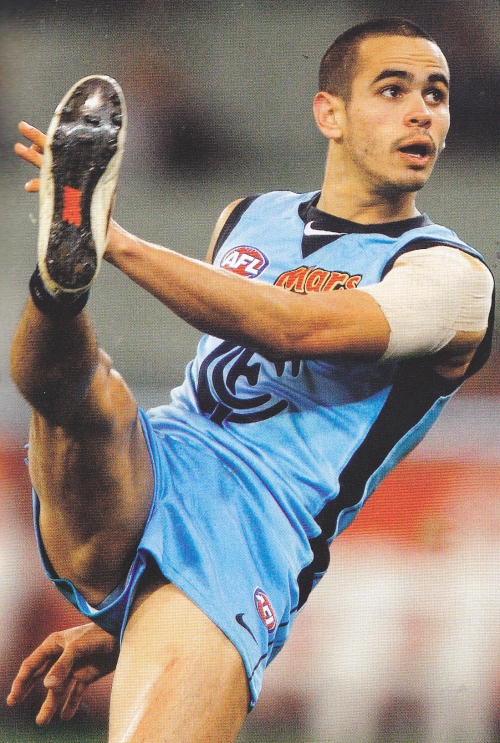 
The impact of Jeff Garlett’s arrival at Princes Park in 2009 might best be summed up by a couple of anecdotes from the man who discovered him as a lightly-built youngster running riot in a forward pocket for Swan Districts against West Perth during the opening round the WAFL in 2008. Carlton talent scout Shane Rogers was on hand to see 18 year-old Garlett kick four goals that day, and his name went straight into Rogers’ notebook.

The only concern was Garlett’s slight frame. “We all thought he was a bit skinny,” said Rogers, “but he’d had a tough upbringing, and we didn’t know his story. Big blokes kept hitting him, and he kept bouncing back up – a bit like the rubber man”. Barely a year later, Rogers was at Melbourne airport to greet Jeff when he joined the Blues as a first round selection (number 6 overall) in the 2008-09 Rookie Draft. “I remember picking him up at the airport when he flew in from Perth for the first time,” Rogers recalled. “I gave him the spiel about the club, and the importance of knuckling down and biding his time to earn elevation to the senior list later in the season. But he said to me; ‘Oh no, I’ll play round one, don’t worry about that’. So I said to him; ‘You’ve got to be elevated prior to round one,’ and he said, ‘I will be,’ and he was.”

That tremendous confidence and self-belief was indeed justified during Carlton’s 2009 pre-season NAB Cup campaign, when Garlett’s pace and flair stood out, and he was a logical candidate to replace Robert Warnock on the Blues’ senior list when the big ruckman suffered an unfortunate, season-ending ankle injury. To Shane Rogers and good judges from other AFL clubs, Garlett's elevation came as no real surprise.

Jeff’s football pedigree reeked of class. He was a cousin of Hawthorn star Lance Franklin, Fremantle’s Des Headland, Dale Kickett (Fitzroy, West Coast, St Kilda, Essendon and Fremantle) and North Melbourne's Cruize Garlett. His uncles included Magpie Leon Davis, and former Roo, Bomber and Swan Derek Kickett. Born in Burracoppin in WA, he had played 21 games for Swan Districts before crossing the Nullabor to Princes Park. Given his relationship to "Buddy" Franklin, Carlton was not surprised to find that Hawthorn were also very keen on Jeff, but given our higher position in the draft selection process, he was always more likely to find his way to the Blues.

Sure enough, Garlett’s sparkling pre-season was rewarded when he was selected to make his senior debut exactly as he had predicted – in the 2009 first round blockbuster between Carlton and Richmond at the MCG. The swell of excitement as a wide-eyed teenager from the dusty expanses of country WA ran out onto the cauldron of the MCG in front of 87,000 roaring fans must have been immense, but if there were any nerves, Jeff certainly didn’t show them.

Wearing guernsey number 38, he burst into action straight away, running and tackling hard, and showing remarkable composure. As Carlton blasted Richmond off the park, Jeff goaled with his first kick and thrilled Blues fans with his dash and poise. He went on to play in the first three games of the year, and another three mid-season, before he was sent back to the VFL to freshen up.

Back in the side by round 21, Garlett was looking forward to his first taste of finals football when his progress was halted and he was suspended for a week by the club for arriving late for training. It was a timely lesson that thankfully didn’t stop him from finishing off his first year by playing in the Blues’ heart-breakingly narrow loss to Brisbane in the 2009 Elimination Final at the Gabba.

Season 2010 didn’t get into full swing for many fans until round 4, when Carlton’s champion captain Chris Judd returned from suspension, and a fitter, slightly heavier Garlett was called up for his first senior game. From then on, both had outstanding seasons. Juddy led the Blues into a second-successive Elimination Final - winning his second Brownlow Medal on the way – while Jeff added real firepower to Carlton’s attack at half-forward, and kicked 39 goals in 20 consistently-good games. In one of the season highlights, Garlett chopped up Essendon with a best on ground display on a Friday night at the MCG in round 19, sending through six goals, and earning a well-deserved Rising Star nomination.

Although the season finished on a sour note for the Blues after another heart-breaking Elimination Final defeat – this time by Sydney - Jeff’s big season saw him finish seventh in voting for the John Nicholls Medal. He also overtook Rohan Welsh as Carlton's leading goal-kicker in guernsey 38.

After being rewarded with promotion to the senior list at the 2010 National Draft, Jeff continued to thrill the Carlton masses in 2011, as his tenacity and deadly finishing made Carlton's attack among the most potent in the competition. Playing all 24 matches, he scored another 48 majors to finish third on Carlton’s goal-kicking list behind Andrew Walker (56) and Eddie Betts (50).

For the first time in ten years, the Navy Blues won through to the second week of the 2011 finals by destroying Essendon in an Elimination Final, only to face the enormous task of beating West Coast at Subiaco on the following Saturday afternoon to stay in flag contention. It was not to be, but the team gave their all in getting to within three points of the Eagles at the final siren, and could have been unlucky to lose.

Buoyed by those encouraging results, Carlton supporters looked forward with confidence to 2012, although no-one could have foreseen the disasters that unfolded. After dominating the first three games of the season, the high-flying Blues crashed back to earth when a raft of injuries led to a mid-season slump, and eventually, to a tenth-place finish that cost incumbent coach Brett Ratten his job.

As a consequence of the loss of key personnel for extended periods, some Blues were played out of their preferred position, or subjected to extra pressures that they found difficult to cope with. Garlett fell into this category. Robbed of the opportunity to scout around the feet of the likes of Lachie Henderson or Jarrad Waite, Jeff was often pushed up into the midfield, where his scoring opportunities dried up. His confidence lapsed too, and during the later part of the year in particular, he missed a number of shots at goal that he would normally have nailed without thinking. His tally of 29.27 for the year was handy, but at least 20 goals short of what was expected.

In September 2012, Carlton’s board appointed former Collingwood and West Coast Premiership coach Mick Malthouse as Ratten’s successor, and the Blues embarked on a season of change that ended with a surprise late entry into the 2013 finals. Garlett had another up and down season, highlighted by a 20 possession, 6 mark, 8 tackle, 3 goal-game in Carlton’s round 2 loss to Collingwood, and his 19 disposals, 5 marks and 4 goals against GWS in round 10. As the year progressed however, his form tapered off and he will not fondly remember either of Carlton’s finals matches.

Still, Jeff ended the season as the Blues’ leading goal scorer – even if his total of 43 showed up Carlton’s overall lack of penetration in attack. Eddie Betts and Jarrad Waite finished next-best on 27 each, with all three unable to muster 100 goals between them. In a decision that deeply disappointed everyone at Princes Park, Betts departed shortly after the season ended to join the Adelaide Crows, bringing the era of the Three Amigos - (Garlett, Betts and Chris Yarran) - to a premature end.

Making matters worse, by round 2 of 2014, a calamitous year for both Jeff and the club was underway. On a Thursday night at the MCG in late March, Garlett played his 100th career game when the Blues fell to Richmond. A fortnight later, Garlett was one of a number of players dropped from the team when Carlton remained winless. Recalled for round 6, Jeff played the next six matches in succession, but a return of nine goals and an average of 8 possessions per game wasn’t acceptable, so he was omitted once more.

Amid rumours of ongoing problems in his private life, and a falling-out with his coach, Garlett was still playing VFL football by August, when his career imploded after a late night out with team-mate Mitch Robinson. In contravention of team rules, the pair partied at a city nightclub until the early hours, then became involved in a brawl as they headed home. Robinson suffered a fractured eye socket, whilst Garlett escaped with only cuts and bruises – but each lied to the club at training the following day before eventually confessing the truth.

Carlton’s administration took a dim view of Garlett and Robinson’s antics. Both were suspended and fined, and in early October, Garlett was traded to Melbourne – ending a relatively brief and turbulent career in navy blue. Garlett would play the next five seasons with the demons from 2015 to 2019 and played a further 78 games and boot 138 goals. Garlett ended his AFL career with 185 games and 321 goals after being delisted at the end of the 2019 season, ironically overall he would play in 92 wins and 92 losses and one draw.

Garlett is the second cousin of former Gold Coast Sun player Jarrod Garlett who was drafted by the Blues with pick 78 in the 2017 National Draft.