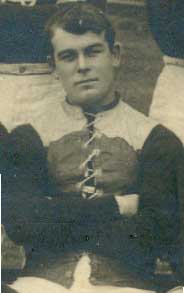 Doug Gillespie and his twin brother David were true Carlton locals - born in a house in the grounds of the Melbourne Zoo, Parkville, where their mother Mary ran the kiosk. Doug was destined to spend most of his life at the zoo, where in time he became both head animal keeper and chief gardener - except for those years when he was a star full-back for the Carlton Football Club. He was outstanding in the Blues' 1906 and 1907 Premiership teams, but three years later became embroiled in a match-fixing scandal that shook the VFL to the core. In the aftermath to that affair, two of Gillespie's team-mates were suspended for five years each.

Gillespie began his career at Carlton in unusual circumstances. Part of a group of friends of future Blues champions Rod McGregor and Alex ‘Bongo’ Lang, he was watching training at Princes Park one afternoon when a ball was kicked from the playing field and bounced past him. Carlton coach Jack Worrall was watching on as Gillespie retrieved the ball, and punted it back onto the oval. Impressed by the fluent kicking style of the young man, Worrall invited him to join in training. Within a matter of weeks, Gillespie had joined his mates in a Carlton guernsey.

Short for a key position player, but powerfully built, Gillespie proved ideally suited at full-back. A strong mark and a powerful punt kick, he starred in Carlton’s Premiership double of 1906-’07, and only an injury during the 1908 finals prevented him from making it a hat-trick.

Carlton topped the ladder again in 1910 and was preparing to meet South Melbourne in that year’s second semi-final when the fledgling VFL was stunned by the news that Carlton had withdrawn three players; Gillespie, Lang and Doug Fraser, from the selected team. No reasons for the club’s action was given, but strong rumours that the three had been bribed to play poorly against South were soon circulating. The VFL and Carlton immediately launched separate investigations. Unsettled, the Blues lost to the Bloods by 12 points – but we still gained an automatic place in the Grand Final because we had finished the year as minor premiers. South Melbourne then lost the Preliminary Final to Collingwood, setting up another Carlton-Collingwood decider.

In the week prior to the Grand Final, Lang and Fraser were found guilty of accepting bribes and suspended for five years each. Gillespie was exonerated of all charges, and returned to the team for the Grand Final - but not surprisingly, the Blues struggled to match a disciplined Collingwood team and lost by 14 points. For more on this sensational episode, click here.

In an effort to escape the scandal, Gillespie crossed to VFA club Brunswick in 1911, before returning to Princes Park for one final season in 1912. A consummate defender, he didn't trouble the scoreboard attendants in any of his 90 games.

Doug's obituary which appeared The Argus January 08 1947 (p7) says Doug Gillespie served in the AIF during the First War.

Doug’s twin brother Dave also played briefly at Carlton in 1907 and ’08. Later, while serving as a police constable, he volunteered for front-line service in World War 1. He was severely wounded in action and repatriated home to Australia, but died soon afterward at Caulfield Military Hospital.

Nagambie played Rushworth on Wednesday June 04 1914
Amongst the better players for Nagambie;
"Gillespie (an old Carlton man) played back in goal and saved many points."
(Trove: Murchison Advertiser.. June 05 1914 p2)
"A protest was lodged by the Rushworth club against the match played at Nagambie on the 3rd. inst being awarded to Nagambie, on the grounds of having played Douglas Gillespie contrary to the rules, he not having resided in Nagambie the required month prior to the first match."
(Trove: Murchison Advertiser.. June 19 1914 p3)
Doug Gillespie played with Nagambie in the Waranga North-Eastern Association Grand Final against Murchison. Murchison won by 16 points.

2022 - Mike Fitzpatrick inducted into the AFL Hall of Fame.