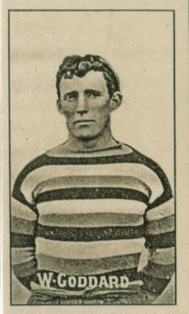 Another of the many gifted football nomads who plied their trade on both sides of the continent in the early part of last century, William George ‘Bill’ Goddard was 27 years old when he made his VFL debut for South Melbourne in 1907, and past 30 when he played in the back pocket for Carlton in the 1910 Grand Final.

Born in the northern Victorian town of Corop - between Elmore and Stanhope - Goddard travelled widely throughout his career. When South Melbourne recruited him from North Fremantle in the WAFL, he was an accomplished centreman whose years of hard work as a timber-cutter had given him unusual strength and stamina. He had played one senior match for South Fremantle in 1900 before spending the next four seasons with North Fremantle, and it was from there that South Melbourne convinced him to head back east for the challenges and rewards of VFL football.

Bill did well in his debut year with the Bloods, although he was left out of the Grand Final team that went down to Carlton by five points. South was wracked by dissension after that loss, and fell away on the field to finish fifth in 1908. That brought about an exodus of players - including Goddard, who departed after 28 games and 17 goals in two seasons.

In 1910 Bill turned up at Princes Park to join the Blues - just in time to jump from the frying pan into the fire. Prior to the first match of the new season, simmering tensions at Carlton burst into the open when an extraordinary general meeting of members was called, with the express purpose of sacking three-time Premiership coach Jack Worrall. The tactic succeeded – Worrall walked out of Princes Park (taking four of the club’s biggest stars with him), and was replaced by champion follower Fred ‘Pompey’ Elliott as captain-coach.

Although well aware of Goddard’s ability in the centre, Elliott asked him to play in defence for Carlton – at first on a half-back flank, and later, in a back pocket. By the time the Blues claimed the minor premiership - two wins clear of Collingwood - Bill was proving a tough and adaptable customer on the last line, alongside full-back Doug Gillespie.

In September 1910, one of the decade's most sensational football stories broke just hours before the second Semi-Final, when three Carlton players; Alex ‘Bongo’ Lang, Doug Fraser and Doug Gillespie, were dropped from the team to play South Melbourne. All were accused of taking bribes, and suspended pending an investigation. Amid the turmoil, ‘Pompey’ Elliott recast his side, with Goddard at full-back, Dick Harris alongside him in the pocket, and veteran former captain Jim Flynn supporting Elliott himself in the ruck. Somehow, the depleted Blues found a way to match the Southerners throughout the game, and only their dreadful inaccuracy (Carlton kicked 6.17 to 10.5) prevented them from snatching victory.

During the following fortnight, Lang and Fraser were found guilty of accepting bribes, but Gillespie was quickly cleared. Collingwood beat South Melbourne in the Preliminary Final, so Carlton immediately exercised their right (as minor premiers) to challenge the Magpies to a Grand Final showdown.

More than 42,000 packed into the MCG on that hot and windy October afternoon, when luck and accuracy again deserted the Blues. Champion centreman Rod McGregor, and rover Archie Wilson both succumbed to knee injuries early in the third quarter, and the match deteriorated into a succession of running brawls. Four players – two from each side – were reported as Carlton had one more scoring shot than the black and whites, but went down by 14 points.

Goddard’s one tumultuous season at Carlton ended that afternoon, and in 1911 he crossed to St Kilda, where he played another seven matches before leaving VFL football for good to join Port Melbourne in the VFA. In 1914, he bobbed up again on the other side of the country and continued his extensive career at East Fremantle. Playing in a back pocket at the age of 34, Bill won a flag at last when Easts beat South Fremantle in that year’s WAFL Grand Final.

Remarkably durable, Goddard was 38 when played the last of his 64 WAFL games for East Fremantle, and he would have been part of another Premiership side in 1918 had he not been injured the previous week.