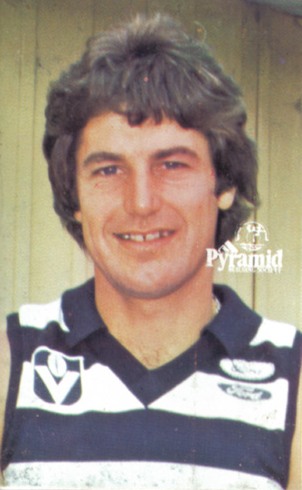 
Clarke was an often-brilliant half forward flanker or ruck-rover who played over 200 games at Geelong (recruited from Geelong College). A regular Victorian State player, he won the Cat’s Best and Fairest award three times. But when Geelong could not, or would not meet his demand for an eleventh season in 1982, Clarke left Kardinia Park and signed with the reigning Premiers, Carlton.

Approaching thirty, Clarke found it difficult to break into a potent Blues combination headed for back to back Premierships. While he managed just nine appearances in his one season at Princes Park, he proved as dangerous as ever up forward, averaging better than two goals per game. However he wasn’t selected in the successful Grand Final team, despite being one of the catalysts in our hard fought win against Hawthorn in the Preliminary Final (where he kicked 2 crucial goals). He was however accorded the honour (together with Frank Marchesani) of being allowed to run on the field with full team gear prior to the 82 Grand Final. Clarke retired over the next pre-season.

After football, Clarke became a prominent businessman in Geelong as a principal of the Pyramid Building Society. In 1990 he made the headlines again when Pyramid collapsed, sending shock waves through the Australian financial sector and forcing the state government to rescue many creditors who were facing financial ruin.

Interestingly, one of his sons, David, mirrored his father and moved to Carlton for the 2004/2005 seasons after 89 games with Geelong. Given the identical names, David senior is often represented as David E Clarke in the stats websites.