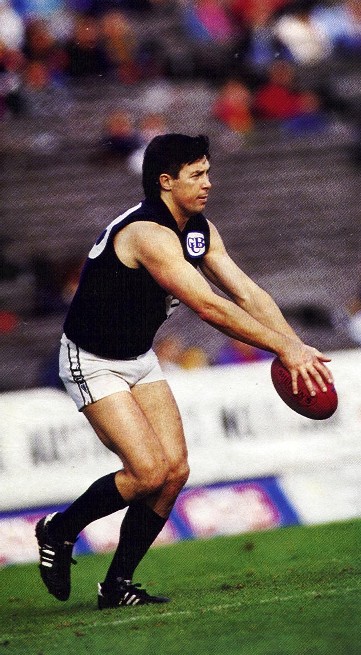 
The younger and smaller brother of Carlton’s immortal Stephen Kernahan, David spent six seasons at Princes Park from 1988 to 1993. He seemed destined for a good career when he kicked the match-winning goal in his first senior game against Hawthorn, and then making the top 5 in the B&F in both 1990 and 1991. Incidentally, it was in 1990 that he brought up the only Brownlow Vote of his career, with a strong game against the Swans in Round 14.

Unfortunately for David, his arrival at Carlton from Glenelg in South Australia coincided with a slump in team performance in the years following the 1987 Premiership. Originally considered as a forward, he found a niche in defence in his second year, playing a string of solid games.

Then, just as he was cementing a regular place in the team, he was struck down by hamstring and groin injuries that hampered his career from that point on, taking a heavy toll on the 188 cm, 83 kg utility and restricting him to just 53 games in six seasons. He showed plenty of grit in persisting until 1993 before returning home.