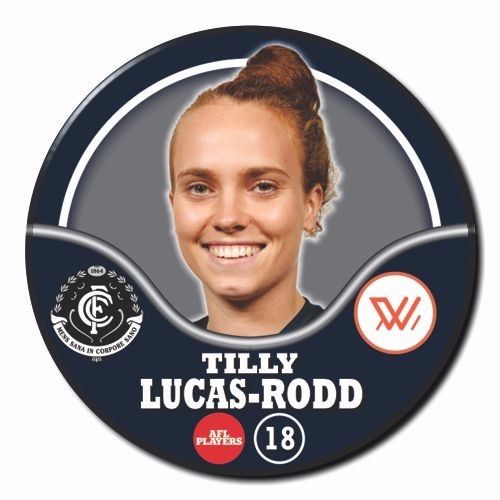 Labelled as one to watch in 2017, Tilly Lucas-Rodd will add pace and agility to Carlton’s midfield. The youngster’s speed, coupled with her ball carrying ability, will play a significant role in providing versatility and run in the Blues’ midfield. Senior women’s coach Damien Keeping has been impressed with the No.99 draft pick's junior football career and looks forward to having her on the team. “Having performed well through her youth girls years, Tilly has grown into her role at senior level at the St Kilda Sharks,” Keeping said. “She’ll bring a different dimension to our group, that’s for sure.”

Lucas-Rodd had a solid first season coming 7th the inaugural best and fairest count. In April 2019, Lucas-Rodd was delisted by Carlton. However, she was soon picked up by St Kilda and helped lead their impressive maiden season in the VFLW, finishing 2nd on the ladder and making the preliminary final before succumbing to eventual premiers Collingwood. Her superb season was capped off by winning the club's best and fairest award, as well as receiving a place in the VFLW Team of the Year. Tilly would be signed by St Kilda's AFLW side as a free agency for the 2020 season. Lucas-Rodd played with St Kilda from 2020 - 2022 playing 25 games and kicking 1 goal. She then requested a trade to Hawthorn's new AFLW team for the 2022/23 season.


Lucas-Rodd 'stoked' with victory
Carlton’s Tilly Lucas-Rodd was one of 22 Carlton players who breathed a sigh of relief when the final siren sounded on Saturday afternoon. The Blues fought off a late resurgence by the Western Bulldogs to claim a six-point win in front of a vocal home crowd at Ikon Park. In the must-win clash for Carlton, Darcy Vescio and Bella Ayre combined for five of the Carlton’s eight majors, but their efforts to see the Blues record a season-high score were almost undone by the unrelenting Bulldogs. “It was a bit up in the air in that last quarter when they (Western Bulldogs) started to come back,” Lucas-Rodd said after the match. “I just knew that we had to stick to our structures and trust our game plan and keep working hard. “We are all so stoked to get the win.” In the Blues' third AFLW victory, the speedy midfielder racked up a game-high 17 disposals and displayed her dominance on the wing and in the backline with six marks and three tackles also to her name. Despite being the Blues’ highest ball-getter, Lucas-Rodd attributed the triumph to her teammates in defence and singled out the return of marquee player Brianna Davey as integral to the win. “It was the backline who really stood up today, especially with Bri (Davey) back,” she said. “She’s a bit of a general back there, so she was an important inclusion for us. “They all stood up individually and played a good game.” With three wins now under their belt, the Blues’ grand-final hopes remain intact, and according to Lucas-Rodd, Saturday’s confidence-building performance will hold the side in good stead as the season draws to a close. “We have to win the last two games (to make the grand final), but this (Saturday’s win) gives us a lot more hope going forward,” she said. Carlton will travel to unfamiliar turf this Friday 10 March when it lines up against Fremantle for its Round 6 match at Domain Stadium. - Lucy Watkin, Carlton Media March 7, 2017


Blues' AFLW Rising Star double
Carlton’s Bella Ayre and Tilly Lucas-Rodd are the Round 5 NAB AFL Women’s Rising Star nominees - the first pair from the same club to be nominated in the same week. Ayre, Carlton's youngest player at 18 years and three months, played a key role in the Blues' six-point win against the Western Bulldogs at Ikon Park on Saturday. The exciting youngster was an imposing figure in Carlton’s forward line, kicking two goals and gaining eight possessions. The year-12 student represented Victoria Country in the 2016 National Under 18 Competition and was selected in the All-Australian team. Playing 10 senior matches for Bendigo Thunder, Ayre managed to kick 38 goals and finish runner-up in the club’s best and fairest. She was selected with pick number 51 from Bendigo Thunder in the Victorian Women’s Football League. Midfielder Lucas-Rodd played a key role in the Blues' victory over the Bulldogs, collecting a game-high 17 possessions. The 20-year-old enjoyed a decorated junior career where she represented Victoria in under-18 programs and was a member of the AFL Victoria Women’s Academy in 2016. She was drafted to Carlton with pick number 99 from the St Kilda Sharks in the VFL Women’s competition and has featured in all five of the Blues' games this season. Ayre and Lucas-Rodd will be awarded $500 each in prize money from NAB to acknowledge their achievements, with the overall NAB AFL Women's Rising Star to be awarded $20,000. - Carlton Media March 7, 2017