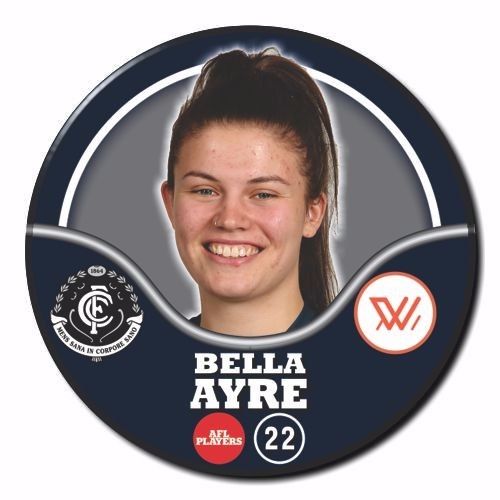 Described by senior women’s coach Damien Keeping as “one of the most exciting youth girl graduates” tin 2016, Arye is a key forward who can take solid contested marks. The No.51 draft pick's versatility to also rotate into the midfield makes her a tremendous acquisition for the team. “Bella’s workrate and endurance allows her to be competitive from the first bounce of the ball, until the final siren,” Keeping said. “Although she generally plays up forward and can pinch-hit in the midfield, Bella can also help down back if required, so she’s an extremely flexible player.” Highlighting her talent, Ayre was named runner-up in Bendigo Thunder's best and fairest in 2016. Bella would play the single season with the Blues before playing at the Brisbane Lions for the next two seasons prior to being delisted at the end of the 2019 season. She made her Lions debut in round 3 the following year, in a 22-point victory over her old side Carlton at Ikon Park.. Ayre was unable to play a single game in 2019 due to injury, and announced her retirement on the eve of the Grand Final to pursue a career as a police officer.

Ayre defying tender years
Bella Ayre’s performance in Carlton’s fourth-quarter fightback against the Demons showed that the future of the Blues’ forward line is in very capable hands. Ayre, Carlton’s youngest AFLW player at 18 years and three months, hasn’t seemed out of place in any of her three matches this season, showing why she’s touted as one of the competition’s most promising youngsters with two final-quarter goals against Melbourne. “It (fightback) was definitely all in the midfield. The way the mids brought themselves to the ground after three-quarter time definitely lifted everybody. Everyone was relentless trying to get the ball into our half,” Ayre said. “I remember the adrenaline hit, and wanting to go out and do something, and have an impact on the game after three-quarter time. A couple of goals was a good individual effort but it was a massive team contribution. “All of the girls worked so hard to come back in that fourth quarter. We definitely could’ve had the game.” Ayre has already shown great resilience this season, fighting her way back from a knee injury in the pre-season to earn a debut in Carlton’s historic season opener. While she was well held in that clash against Collingwood, Ayre’s performances have grown since. “I lacked a bit of confidence (coming back from injury against Collingwood) but I definitely feel like I’m finding my feet,” she said. “Because I am still so young, the girls have got behind me so much, and hopefully as I go on through each game I learn more. I think I’ve started to make more of an impact and contribute to the games.” Ayre has the opportunity to continue her run of form when the Blues take on the Western Bulldogs at Ikon Park on Saturday. Carlton is coming off a two-game losing streak, but Ayre believes her side is well placed to get back on the winners list.“I feel being at home will help us,” she said. “To be at home in our own locker rooms and our own space will be so good.” - Lucy Watkin, Carlton Media March 2, 2017

Blues' AFLW Rising Star double
Carlton’s Bella Ayre and Tilly Lucas-Rodd are the Round 5 NAB AFL Women’s Rising Star nominees - the first pair from the same club to be nominated in the same week. Ayre, Carlton's youngest player at 18 years and three months, played a key role in the Blues' six-point win against the Western Bulldogs at Ikon Park on Saturday. The exciting youngster was an imposing figure in Carlton’s forward line, kicking two goals and gaining eight possessions. The year-12 student represented Victoria Country in the 2016 National Under 18 Competition and was selected in the All-Australian team. Playing 10 senior matches for Bendigo Thunder, Ayre managed to kick 38 goals and finish runner-up in the club’s best and fairest. She was selected with pick number 51 from Bendigo Thunder in the Victorian Women’s Football League. Midfielder Lucas-Rodd played a key role in the Blues' victory over the Bulldogs, collecting a game-high 17 possessions. The 20-year-old enjoyed a decorated junior career where she represented Victoria in under-18 programs and was a member of the AFL Victoria Women’s Academy in 2016. She was drafted to Carlton with pick number 99 from the St Kilda Sharks in the VFL Women’s competition and has featured in all five of the Blues' games this season. Ayre and Lucas-Rodd will be awarded $500 each in prize money from NAB to acknowledge their achievements, with the overall NAB AFL Women's Rising Star to be awarded $20,000. - Carlton Media March 7, 2017

Carlton trades Ayre to Brisbane Lions in AFLW
FORMER Bendigo Thunder forward Bella Ayre will continue her AFLW career with the Brisbane Lions. Ayre was traded on Thursday to Brisbane from Carlton in what was one of the moves as part of a complex four-club deal that also included Melbourne and the Western Bulldogs. Ayre, 18, played six games and kicked four goals for the Blues in the first season of the AFLW, in which she was also one of the competition’s Rising Star nominees. Brisbane was runners-up last season. - Bendigo Advertiser

In June 2022, after three years, Ayre returned to the game at AFLW level, joining expansion club Essendon after playing for their VFLW side.