Although he never played a game of Australian football at senior level, Kenneth George Luke stands as one of the towering figures in the history of the Carlton Football Club. A self-made man who left school at 14 and built a multi-million dollar business almost from scratch, he was an enthusiastic cricketer, motorcycle rider, racehorse owner and yachtsman who was elected President of Carlton in 1938, and served in that capacity for 17 years. In 1956 he rose to become President of the VFL, and led the League through a period of rapid expansion that culminated in the opening of VFL Park, Waverley in 1970. Eight years earlier he had been knighted, but throughout his life Sir Kenneth always preferred the title “K.G.” and mixed comfortably with every level of society.

Ken came into the world on November 11, 1896 in Port Melbourne, son of London-born parents George Edwin Luke (a labourer) and his wife Minnie. He was educated at Brunswick South State School and Ballarat High School, before taking up an apprenticeship as an engraver in a silverware factory at the age of 14. Ambitious and driven, K.G. worked hard and saved hard from day one. In 1921 he purchased a half-share in a small metal-spinning and silverware business in Carlton, and it was there that his close association with the Blues began. Four years later he had bought his partner out, and was employing seven people making high quality tableware and stainless-steel surgical equipment. For ten years Luke worked seven days a week, with an alarm clock as his constant companion to wake him at regular intervals at night so that he could keep the machinery going. In 1929 he bought a larger factory in Queen's Parade, Fitzroy and doubled his workforce as he expanded the range of products he manufactured, including a popular glass-washing machine for hotels and guest houses.

A great believer in the adage, “if you want something done, ask a busy man,” K.G. accepted the Presidency of Carlton in 1938. By then he had already proven his mettle as a Carlton committeeman and the Blues’ delegate (from 1935) to the Victorian Football League, and his ascendancy to the Presidency coincided with Carlton’s victory over Collingwood in that year’s Grand Final. When World War II erupted in 1939, K.G. became an honorary adviser to the Department of Supply and Shipping as his business rapidly expanded. In 1945, amid celebrations of the end of the costliest war in history, Carlton won their second flag under Luke’s leadership when the Blues defeated South Melbourne in the infamous “Bloodbath” Grand Final.

In 1947, Carlton snatched yet another flag with a sensational last-minute goal against Essendon in a dour Grand Final. During that year Luke purchased a farming property named Deepfields (near Romsey) as a weekend retreat. However, the city-bred industrialist soon developed a passion for livestock, so he transformed the property into a stud farm that in time produced champion Dorset Horn sheep and Poll Hereford cattle. In 1949 the State Government appointed K.G. a trustee of the Exhibition Building, and in 1952 he founded the White Ensign Club for sailors as a memorial to his father, who had always loved the sea. A year later, K.G. Luke (Australasia) Ltd was registered as a public company. By then, a great many of Ken’s 650 employees had been with him for more than 20 years. Another of Luke’s sporting passions was horse racing, and over his lifetime he owned a string of thoroughbreds that were always given “double F” names like Fighting Force and Feeling Fine.

In 1946 – eight years into his Presidency at Carlton – KG took on a supplementary role as Vice-President of the VFL. A decade later, he succeeded Dr. William McClelland as President of the League – despite the fact that by then, he and Carlton had been embroiled in a bitter dispute with the Victorian Government for some time. Melbourne was scheduled to host the Olympic Games in 1956, and earlier, the Carlton committee scored a major coup for the club when the International Olympic Committee agreed that the games would be based at Princes Park. But the State Labor Government (led by John Cain Senior) joined with the Melbourne Cricket Club to thwart Carlton’s plans, and the Games were held at the MCG.

The year 1954 produced more personal and public triumphs for K.G. when he was awarded a CMG (Commander of the Order of St Michael and St. George) in the Queen’s Birthday Honours List. The citation described him as a “long-serving sporting administrator and philanthropist.” Eight years later, at the age of 65, he became Sir Kenneth Luke when he was knighted for “exceptional public service.” Meanwhile, Luke’s greatest vision for the game of Australian Football began to take shape when the League purchased 212 acres of grazing land at Mulgrave, and started planning for purpose-built stadium that would eventually replace the MCG as the home of the code. Like many others, K.G. resented the power and influence of the Melbourne Cricket Club, and wanted to build a first-class stadium that would channel all benefits back to the League’s member clubs. 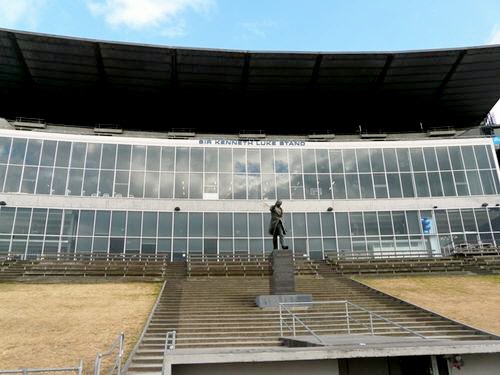 The original plans stipulated a capacity of 150,000, which would have made it one of the biggest stadiums in the world. But once again, the Victorian Government and the MCC opposed Luke’s grand vision and the eventual capacity was restricted to around 100,000. In another crucial rebuff, a planned direct rail link to the stadium was never built, and in the end it was the dearth of public transport links that rang the death knell for Waverley. The stadium operated for almost 30 years – opening in 1970, and hosting its last game for Premiership points between Hawthorn and Sydney in August, 1999, but it was never fully embraced by the football public who called it “Arctic Park” because of its prevailing cold winds and unfortunate location in a rain belt.

While the saga of Waverley unfolded, the pace at which K.G. lived his life remained unrelenting. He was 71 years old when Carlton won another flag in 1968, before following up with the greatest Grand Final victory of them all in 1970. By then Sir Ken was a councillor of the Royal Agricultural Society of Victoria, and a member of at least fourteen clubs, including the Victoria Racing Club (and remarkably) the Melbourne Cricket Club. Out at Waverley, the Sir Kenneth Luke Grandstand (which still exists) was under construction. Typically, K.G. continued working right up until his last moments, which came when he died at his home in Hawthorn on June 13, 1971. He was survived by his wife of 32 years, Valda, and a daughter, Jennifer.

Some 30 years later, the Sir Kenneth Luke Grandstand at Waverley - which in time was to be refurbished, and become the training base for the Hawthorn Football Club – was placed on the Victorian Heritage Register. Then in 2006, Sir Ken - simply “K.G.” to so many – was inducted into the AFL Hall of Fame.