Carlton lost to the Bulldogs by 3 points - Optus Oval.

Carlton were looking for their 14th straight victory. They were dealt a blow prior to the match, with both Bradley & Hickmott last minute exclusions. This would enable Adam Chatfield to play his first and only game.

The Bulldogs employed flooding tactics to congest the Blues' forward line, which would restrict them to just 11 goals (after scoring 28 the previous week). The match was tight all day, the margin never more than 2 goals and less than a goal at each of the breaks. The Bulldogs were just 5 points in front at 3/4 time but the Blues reclaimed the lead with the first 2 goals of the final quarter. It was then goal for goal until the Dogs were awarded a free right in front of goal late in the match, which enabled them to regain the lead. They had by far the better of the free kicks, with 26 to 9 and 15 to 2 in the second half, which angered the largely pro-Carlton crowd.

The Bulldogs then played "keepings off" to maintain possession until the final siren went, ending the Blues 13 match winning streak. Carlton had no answers for Garlick, who pounced on any loose ball in the forward line and finished with a career best 6 goals and the 3 Brownlow votes.

Scott Camporeale had 34 possessions while Brett Ratten had 31. Anthony Koutoufides was a tower of strength in the forward line, taking some strong marks and scoring 2 timely goals from 27 possessions. Heath Culpitt was also handy up forward, making the most of his quite limited opportunities, kicking 2 important goals from his only kicks of the match. Lance Whitnall took 12 marks. 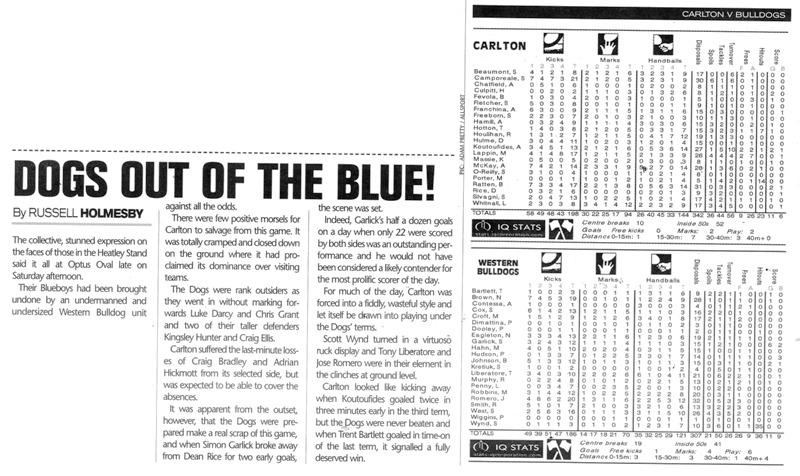