Carlton lose to Essendon by 26 points before MCG sell out crowd billed as match of the season. Kouta injures knee.

This was billed as the match of the season, played before a sell out crowd of 91,571 between the undefeated, top of the ladder Bombers and Carlton, who had won 13 of their last 14 games and were second. The match would start horribly for the Blues, with star player Anthony Koutoufides suffering a season ending knee injury in the opening minutes of the game after a collision with Bomber Jason Johnson. It would then lose captain Craig Bradley for the rest of the game with a hamstring injury. The Blues had most of the play but the Bombers made more of their opportunities, kicking the first 3 goals of the game. Two late crumbing goals to Ryan Houlihan and Matthew Lappin would bring the Blues back into the match but a goal on the siren to the Bombers would give them a 13 point lead at quarter time.

The Blues had the better of the Bombers in the second quarter, kicking 4 goals to 2 (2 each from Lance Whitnall and Mark Porter. Late in the quarter they held a 5 point lead but a goal just before half time gave the Bombers the lead at the long break by the barest of margins. It was goal for goal in the third quarter, the Bombers in front by just 2 points at the final change. But the Bombers proved too strong in the final quarter, outscoring the Blues 7 goals to 3 to maintain their unbeaten record and score a 26 point victory.

Brett Ratten provided plenty of drive in the midfield with 36 possessions, while Scott Camporeale had 29, earning 2 Brownlow Votes. Lance Whitnall kicked 3 important goals. Ryan Houlihan continued to impress with 20 possessions and a goal, enough to earn a Rising Star Nomination.

It was a good result for Carlton, considering both Koutoufides and Bradley were out of the game very early. Their return would surely give Carlton a good chance of defeating their arch rivals in the finals. Unfortunately Kouta would not manage to play again in 2000, while Bradley would miss the next 3, including the crucial Qualifying Final. 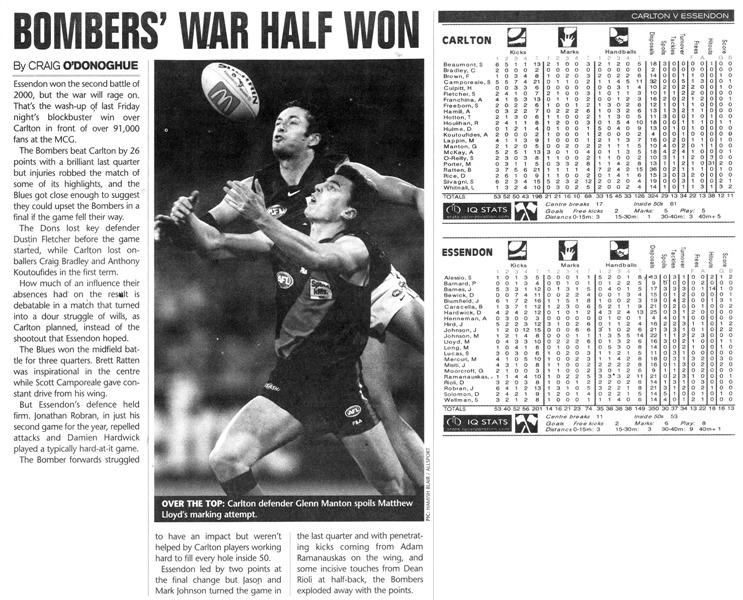 Rising Star Nominee: Ryan Houlihan
Carlton became the first club in VFL/AFL history to generate $1 million profit in gate receipts from a game of football. All of the gate takings from this game went directly to the club.
50 Games: Anthony Franchina