Another classic match ended in uproar when Carlton full-back Peter Barry was awarded a controversial free kick against Geelong's crack full-forward Doug Wade, and Carlton hung on to win by 5 points.

After a draw in the Preliminary Final the previous week, the replay was also a great game. Geelong took a gamble by playing star forward Doug Wade, who had missed the previous week, and their faith was rewarded when he booted 6 goals. After a tight first half. Geelong led by a point at half-time, but Carlton rallied to be nine points up at three quarter time. Wade then kicked the first two goals of the final quarter to reduce the Blues lead to 1 point. Both defences we on top and scoring was limited to points, until Sutherland goaled to give Geelong a two-point lead with 23 minutes gone in the term.

After 27 minutes, Johnny James darted out of a pack and kicked an answering goal for the Blues to regain ascendancy, before a long bomb to the teeth of goal seemed to be clearly marked by Wade 30 metres out, directly in front. Wade had kicked 6 goals 1 behind for the day, and looked a monty to steal the game, but umpire Jack Irving stunned the Geelong supporters and delighted every Blues fan, when he signalled a free kick to Carlton full-back Peter Barry. As Barry's punt kick sailed downfield, the siren sounded to end the game, and the terraces erupted in a mixture of fury and elation. Afterward, Irving explained that he had seen Wade hold Barry out of the contest very early, by reaching back and taking hold of his opponents shorts - thus preventing him from fairly contesting the mark. Irving had had no hesitation in awarding the free for holding the man, in one of the bravest and most controversial umpiring decisions in finals history.

This game is remembered as one of Carlton's controversial finishes, a theme explored in a Blueseum exclusive article available here.

The Blueseum is putting together an Image Gallery for these games, available here.

"I was nearly 12 when my mum took me to my first finals game. We stood at the Jolimont or City end behind the goals. About all I can remember is of course, the Peter Barry - Doug Wade incident which happened right in front of us. Wade took the mark in the dying seconds and would have kicked the goal to win the game. I recall a split second before he grabbed the ball, Wade's arms going back to Barry who was behind him. Irving paid the free kick to Peter Barry who cleared the ball and the siren went.
The papers and TV were full on for the next couple of days. Frame by frame photos of the free kick appeared in "The Sun". Former umpire Allan Nash said that it was the most courageous decision he had ever seen by an umpire." (bluey) 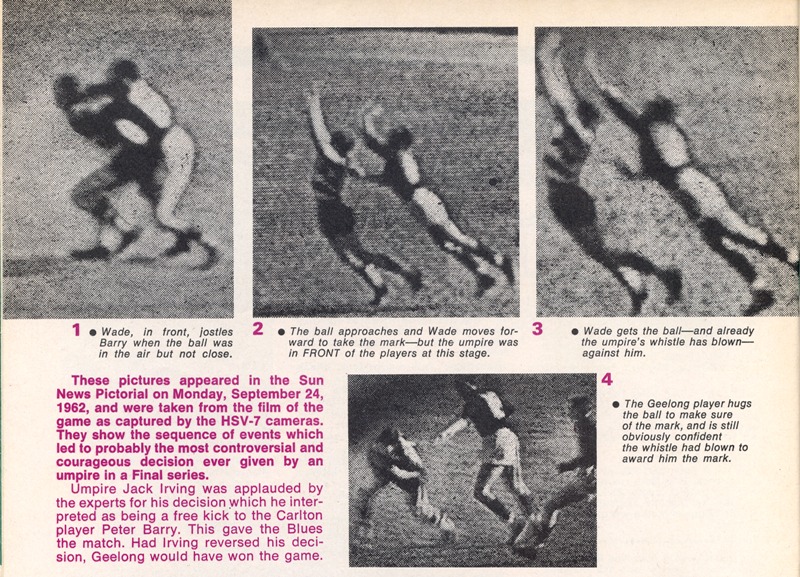 Interesting Fact: This was the last of 242 games played by Carlton without playing in a Grand Final, a record that would not be broken until the 21st century...