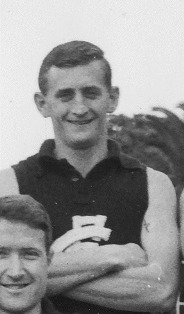 
Much like his father (1938 Carlton Premiership defender Frank Anderson) Graeme Anderson was a capable, no-nonsense half-back flanker who played 79 games for the Navy Blues between 1961 and ’68 – including the sensational 1962 final series that saw the first-ever Preliminary Final draw in VFL history between Carlton and Geelong.

Recruited from Watchem-Corack in north-western Victoria via Seaford where he won the Peninsula's best and fairest in 1960. Anderson created a little bit of history for himself in his senior debut for Carlton, becoming the first Blue to wear the number 43 guernsey later made famous by David McKay and Anthony Koutoufides. On a milestone Saturday afternoon in round 9, 1961, Anderson lined up at full-back against Essendon at Windy Hill, with the wealth of experience of Bruce Comben and Brian Buckley beside him in the pockets. Carlton was generally expected to win, but Essendon came out with all guns blazing and thumped the surprised Blues by six goals. Graeme had his hands full all match with Essendon’s Paul Doran, yet stuck to his task and kept the Bomber spearhead to three goals.

It was a similar story the following week at Glenferrie Oval, when Hawthorn’s rugged full-forward John Peck booted five goals and the Hawks accounted for Carlton by 32 points. Somewhat shell-shocked, Graeme was sent back to the Reserves for the rest of the year after that, to rebuild his confidence.

In 1962, Anderson swapped to guernsey number 26, and wore it throughout the remainder of his career. After another handful of games at full-back, he was shifted out to a flank in round 6 with positive results. Agile, determined and good in the air, he made the most of the space available to him, and created a very effective half-back line with Wes Lofts and Bob Crowe. Together, this trio played a big hand in Carlton’s climb to fourth place by season’s end, and in the finals campaign that followed.

Carlton’s quest for the ’62 flag began with a narrow Semi Final victory over Melbourne, which set up a Preliminary Final clash with Geelong. As any keen Blues’ fan knows, that spine-tingling match ended in a draw – the first in VFL history. The replay was equally as good a spectacle, with Geelong surging toward victory in the last few minutes, only to be denied by two telling marks from Anderson, followed by the game’s pivotal moment when Carlton full-back Peter Barry was awarded a controversial free kick against Geelong full-forward Doug Wade. Wade had appeared to take a clean mark within easy range of goal, but umpire Jack Irving saw him holding Barry by the shorts before the ball arrived, and paid Barry a free kick only seconds before the final siren.

By beating the Cats at last, the courageous Blues qualified for their first Grand Final since 1947 – against the same opponent in Essendon. However, those three gruelling finals matches in succession - decided by a combined total of just seven points – flattened the Baggers. They were a spent force by three-quarter time in the decider, and lost to the Bombers by 32 points.

Throughout the following five seasons, Anderson was a regular in Carlton’s senior side. Although he missed the majority of 1967 through injury, Graeme returned at an opportune time, replacing the injured Wes Lofts at full-back when Carlton and Geelong clashed in yet another Preliminary Final. This time, it was Anderson’s task to pick up Wade. Graeme stuck to his task manfully, but the big Cat used his bulk and experience to kick five goals, which turned out to be the final margin between the two sides.

Anderson played on into 1968, and made his last appearance for the Navy Blues in a 32-point loss to Footscray at the Western Oval in round 16. While he finished off the year with the Reserves, Carlton’s senior side did not lose another match. Barely seven weeks later, Carlton vanquished Essendon by three points in a desperately close Grand Final, to claim our ninth VFL Premiership.

In the years after his retirement from the field, Graeme maintained the friendships and strong links he had forged with the Carlton Football Club, and served as Honorary Treasurer of the Past Players Association in 2007-08.

Anderson had a younger brother Robert Anderson who played U/19's and reserve grade football for Carlton from 1967 to 1969.