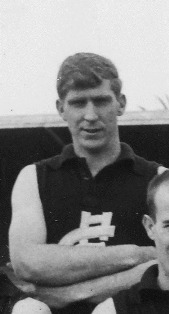 The very aptly-named Murray Kick is the son of Ned Kick, who played eight games in his only season at Princes Park in 1925. Murray did considerably better than his dad, wearing Carlton’s number 30 in a five-season stay between 1961 and 1965, during which he represented the Blues in the 1962 Grand Final. Ned was a follower or ruckman, while Murray was a clever wingman - not blessed with lightning pace, but a strong mark for his size, determined and resourceful.

If anyone can provide a photo of Murray's father Ned Kick please contact blueseum. (www.blueseum.org)

Recruited by the Blues as a 20 year-old from Donald in northern Victoria in 1961, Murray made his senior debut in a sensational game between Carlton and South Melbourne at Princes Park in round 15 of that year. Stationed on a wing alongside Berkley Cox, with Barry Bryant on the opposite flank, Murray was quietly efficient as the dominant Blues won by 59 points. Carlton’s nippy rover Martin Cross played an outstanding game and kicked eight telling goals, but the match was notorious for the physical clash between ruckmen John Nicholls of Carlton, and Ken Boyd of South Melbourne. After the game, Boyd admitted to a newspaper reporter that he had deliberately punched Nicholls behind the play. He was charged by the VFL, and copped a 12-week suspension that ended his career.

By the end of his first season, Murray had already become an automatic inclusion in Carlton’s seniors. He kicked his first two career goals in his third match (a good win over Collingwood at Victoria Park in round 17, 1961) and carried his impressive debut season form into 1962 – playing 20 matches with solid consistency, to finish third in Carlton’s Best and Fairest award.

The Navy Blues’ hard road to the ’62 Grand Final began with a tough, 2-point Semi Final victory over Melbourne, followed by a draw with Geelong in the Preliminary Final, and a controversial win in the replay. Those three gruelling contests took a lot out of the team, and they proved no match for a fit, rested Essendon in the decider, losing by 32 points.

Murray enjoyed another good season in 1963 and added another 17 matches to his tally, although Carlton lost a string of games by very small margins, and fell to sixth on the ladder. Then, throughout 1964-65, injuries at the wrong time and a tailing-off in form restricted him to 14 matches in total. He celebrated another memorable win in his final outing the Blues against Geelong at Kardinia Park in round 13, 1965, then retired from VFL football at the end of that year to take on the role of captain-coach with Goulburn Valley club Lemnos.

Some 23 years later in 1988, a third generation of the Kick clan wore Navy Blue, when Murray's son Martin Kick played with Carlton Reserves.

1963 A player named E. Ted Kick was named in the Reserves for the Round 2 match against St.Kilda.
Murray Kick was playing for the seniors this day. A relation?