Recipient of a controversial last-minute free-kick in the 1962 Preliminary Final replay. 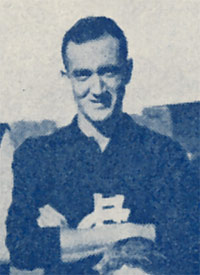 Best remembered for his involvement in one of the most sensational incidents in VFL/AFL finals history, Peter John Barry played 77 games and kicked 24 goals in a six-year career at Carlton from 1958 to 1963. Originally a forward, he took over the full-back role from George Ferry in 1962 and anchored the Blues’ defence for two seasons – including that year’s controversial Preliminary Final replay against Geelong.

Carlton recruited Barry from Bayswater in Melbourne’s outer east in 1957, after the high-leaping young centre-half forward had won the club’s Best and Fairest. Assigned guernsey number 40 by the Blues, he played some good football with the reserves early in 1958, before he was called into the senior team as a late replacement for the game against Essendon at Windy Hill in round 9. Before that match, Peter switched to number 18, and it brought him good fortune. Carlton upset the Bombers by one point in a thriller, and Barry kicked three goals in an excellent debut.

Over the next three seasons, Barry was a regular in Carlton’s key forward post. Although not a prolific goal-kicker himself, he was an excellent link player who brought those around into the game. The Blues went all the way to the Preliminary Final in 1959, and were still flag contenders two years later when reliable full-back George Ferry retired, with no obvious candidate to replace him. Early in 1962 however, Carlton coach Ken Hands asked Barry to take on the crucial role, and Peter fitted in seamlessly. The Blues finished fourth after the home and away rounds, then edged out Melbourne by 2 points in a thrilling Semi Final. A week later, Carlton and Geelong fought a draw in the Preliminary Final, setting the stage for an eagerly-anticipated replay which proved equally as close.

As the clock ticked deep into time-on in the last quarter of the rematch, Carlton led by just 5 points when a long bomb spiralled towards the Geelong goal. Barry had had a tough day against Geelong’s champion full-forward Doug Wade by then, and the Big Cat had already kicked six goals. As the pair jostled for position under the high ball, Wade shrugged off Barry and appeared to take a clean mark only 25 metres out, straight in front. Geelong supporters roared with delight - then howled in fury when field umpire Jack Irving ran in, and signalled a free kick to the Carlton player. Geelong and their supporters never forgave Irving for that one crucial decision, which had been given because Irving believed that Wade had prevented Barry from jumping at the ball by holding him down by his shorts. Barry’s kick sailed downfield (along with Geelong’s hopes) and seconds later the final siren sounded.

Somewhat understandably, after two physically and emotionally draining matches in successive weeks, the Blues couldn’t match Essendon in the following week’s Grand Final and were beaten by 32 points.

Peter played just one more season after that, retiring when the Blues missed the finals in 1963. Ironically, Geelong won the flag in that year. In 1964, Barry signed with VFA powerhouse Port Melbourne and bolstered their defence in 10 games before hanging up his boots for good.

Always a cheerful, if restrained character, Peter passed away on June 7, 2005.