Three tough lead-up finals matches took their toll on the Blues on Grand Final day. Essendon were fitter, fresher and won by 32 points. 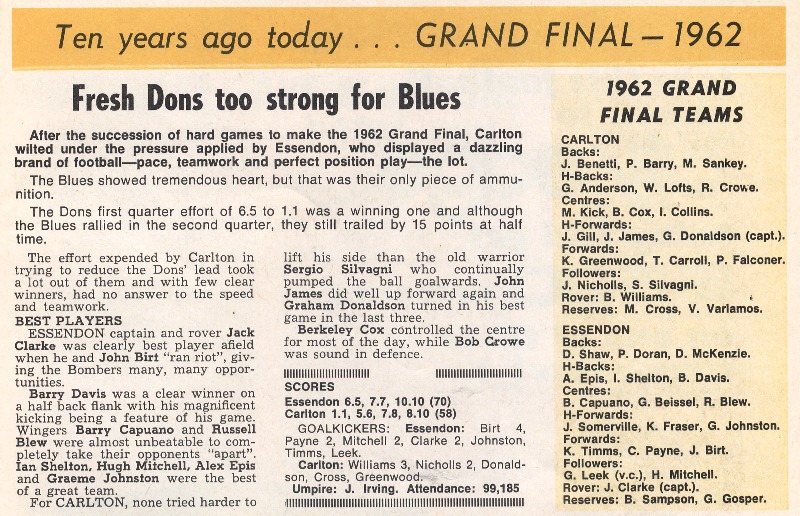 It was a tale of contrasting preparation for the Grand Finalists, with the Blues having been involved in three games decided by less than a goal in a row, while Essendon hadn't played for three weeks. Leading up to the match Essendon had injury problems, with Terry Rodgers unable to take the field and ruckman Geoff Leek requiring a pain killing injection to get him up for the game. Leek actually fooled the Essendon match committee by passing his fitness test (during which he was asked to kick a medicine ball) by using his good leg - not the suspect one.

When the ball was bounced to start the Grand Final, Essendon straight away looked like the fresher side, and slammed on 6 goals to one to take control. Carlton dug deep in the second term and fought back, kicking 4 majors and closing the gap to only 13 points by the half-time break. The Bombers surged again in the third term, with their forwards looking lively and dangerous. The Blues were just out-gunned, and trailed by 20 points at the last break.

The game became spiteful in the first few minutes of the last quarter, as Essendon overwhelmed the Blues defence. They kicked three quick, unanswered goals to establish a 39-point advantage, and from thenh on had the flag in their bag. As the heat went out of the game, Cross scored a consolation goal for Carlton, but it was a case of too little too late.

Best players in a well-beaten Carlton side were Serge Silvagni, who continually stood against the tide, John James and Graham Donaldson up forward, Bob Crowe in defence, and Berkley Cox, who controlled the centre.

In: V. Varlamos
Out: B. Buckley