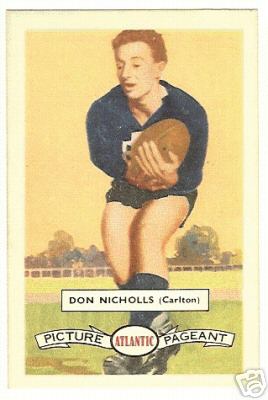 Although his career was largely overshadowed by the exploits of his champion brother John Nicholls, Don Nicholls was himself a stylish centreman who played a creditable 77 games for the Blues in six seasons at Princes Park.

Nicholls first attracted interest from VFL clubs when he starred for his home side Maryborough in 1955. Eventually, he was faced with the choice of joining either Geelong or Carlton, and to the everlasting gratitude of every Blues’ supporter, Don chose Carlton. He arrived at Princes Park in early 1956, and wore guernsey number 12 in his senior debut (as nineteenth man) in a heavy defeat by Melbourne in round 2 of that year.

The following week, against St Kilda at the Junction Oval, Nicholls started the match in the middle of the ground and did well, as the Blues beat the Saints by 22 points. From then on he was a regular in a Carlton side that was in finals contention mid-season, but stumbled through the last few games and missed the finals by just two points. Nevertheless, one of the real positives to come out of that disappointing year was the steady emergence of Nicholls, who played 15 solid games, kicked five goals and collected Carlton’s Best First Year Player award.

Don’s bright start to his VFL career soon focussed the recruiting spotlight on his younger, taller and heavier brother, John – who had moved to Melbourne to live with Don, but was still travelling home to play senior football with Maryborough each weekend. After inviting the youngster to training, Blues’ captain Ken Hands was convinced that the ‘other’ Nicholls had a bright future in VFL football – all he needed was confidence in his own ability.

History has since proven that Hands’ assessment was spot-on. The Nicholls boys teamed up in Carlton’s senior team for the first time against Hawthorn at Princes Park in round one of 1957, and, although the Hawks handed out a football lesson, John Nicholls began a magnificent career that would ultimately include 328 games, three Premierships, and just about every team and individual honour that the game could bestow.

Both brothers had good individual seasons in 1957. Playing in the centre, on a wing or a half-forward flank, Don didn’t miss a game all season. Carlton made the finals in fourth place, but fell to Hawthorn by 24 points in a remarkable first semi-final that saw the MCG covered in a blanket of hailstones after a storm during the half-time break.

Some judicious recruiting in 1958 lifted the Blues, as talented newcomers like Berkley Cox, Chris Pavlou, Peter Barry and John Heathcote established themselves in Carlton’s senior team. Meanwhile, Don Nicholls’ good luck with injury ran out in round 16 of 1959, when he tore a muscle against Melbourne. That setback cost him three games while Carlton battled through to a Preliminary Final meeting with Essendon. He came back to the team as 20th man for that match, but wasn’t called onto the field as his valiant team went down by seven points in a thriller.

Throughout the next two seasons, Nicholls increasingly found himself squeezed out of his favourite centre position by Berkley Cox, and under added competition for a place on the wing or flank. He was tried in defence, but never really settled there and became a regular bench warmer. Eventually, Don decided that he would leave the future on-field exploits of the Nicholls family at Carlton in the large and capable hands of his champion brother. He played his last game for the Blues at full-back in round 12 of 1961, signing off with a five-goal victory over St Kilda at Princes Park.

Don Nicholls’ father Alex was one of four brothers; Charlie, Alex, Percy and Roy, all of whom were prominent players for the Castlemaine Magpies during the 1920s. Charlie Nicholls was the Bendigo Football League’s top goal-kicker in 1925 with 58 majors, and all the Nicholls boys were part of Castlemaine’s first BFL Premiership team in 1926.