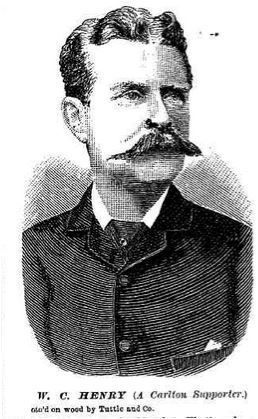 1878 At the Annual Carlton Sports Day held 5th. October at the East Melbourne Cricket Ground,
W. Henry was runner-up in the Second Twenty (Reserves) drop kick contest with a kick of 53 yards.
(The Argus)

1879 Came second in the Reserves Drop Kick Competition with 48 yards.

The Bairnsdale Advertiser and Tambo and Omeo Chronicle August 28 1894 (p2) mentions a Jack Henry "of Carlton football fame" who helped his injured miner mate through deep snow in the Glen Wills region. He had walked 17 hours to reach safety, he then promptly returned to the mining camp. (Same person?)
There was a Joe H. Henry, but he passed away December 1883