Another recruit in 1876 from Carlton Imperials, "likes plenty to do, and does it well.
(Centenary Souvenir of Carlton Football Club. p13)

1876 July 01
Henry played in the Carlton side that played Carlton Imperial at the University ground.

1876 July 22
He also played in the 5-1 win against Geelong at the Argyle Street ground Geelong.
(The Argus)

1876 A promising player, marked splendidly, and a good kick either foot; has great command over the ball.
(The Footballer 1876. p34)

1877 A splendid forward player, marks and kicks in grand style, especially the former, so full of determination at times as to suggest impetuosity.
(The Footballer 1877. p35)

1878 By no means to be despised as a forward, although at times disappointing, especially towards the close, as full of pluck as ever.
(The Footballer 1878. p31)

Played in both Carlton-Waratah games (Rugby and Australian Football) at the M.C.G. June 29 and July 01 1878.

1883 July 07
It was reported that Joe Henry is suffering from a serious illness and a benefit concert is being arranged by members of the athletic and gymnastic societies and former team mates from the Carlton Football Club. The concert to be held at The Athenaeum. 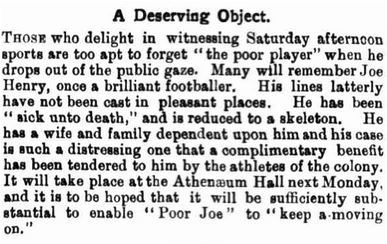 1883 December 19
Members of the Carlton Football Club formed a committee to raise money for the family of the late Mr. J. H. Henry.
He left behind a widow and four children.
See December 1883 for further details.

1939 April 29
The Sporting Globe's football writer Hec A. De Lacey (on p5) wrote;
"I received a very happy visit this week from Mr. Jack Henry, a brother of Joe Henry, a former Carlton player. Mr Henry brought with him quite a few number of Carlton relics in the shape of old membership tickets, menus of important dinners, and odds and ends that would gladden the heart of the true blue supporter.
Mr Henry confesses that his part in the club was to carry the goal posts from one ground to another. He gave me a poem "Forward Carlton" written and sung for the Carlton Football Concert and Ball held at Hockins Rooms, Elizabeth Street, September 16 1878. The words are sung to the air "Many Happy Returns of the Day."