On this memorable Saturday afternoon in the shadow of the gasometer, Carlton’s emerging full-forward Greg Kennedy helped himself to eight majors in a record-breaking victory over the Shinboners at home.
This huge win lifted Carlton's percentage to 133.44 - far superior to Richmond's - but the Tigers still lurked only two points behind and were still a definite threat for the minor premiership. Collingwood were safe in third place, ahead of Hawthorn and St Kilda.

The power-packed Blues showed in this game why they are at the top and North at the bottom of the League ladder, when they kicked their highest ever score at the North ground and their highest score against the Kangas since 1941. It was their first win there since 1969, and apart from the great forward work of Greg Kennedy and David McKay there was little interest in the game. - Football Record.

Carlton again
The amazing Carlton machine continues to grind all sides into the dust with the greatest of ease. The Kangas had the unfortunate task of trying to beat the Mighty Blues. Even at this stage, with the season proper still two games from completion, Carlton appears to have a mortgage on the flag. The team is so consistent and the 18 players are producers. Very few of them appear to have bad days and although North Melbourne is enthusiastic and expects to go places, at best it was a dessert for Carlton. - Polly Farmer; The Australian.

I asked the players for a big win and the result showed we achieved this. We were pleased with the efforts of all our forwards, particularily Kennedy and Walls. But overall our victory was a real team effort and this is what wins matches. - John Nicholls.

100 minutes of solid football..... without really trying.
Usually a football team that doesn't try, doesn't win.... Yet the way Carlton handled North Melbourne it looked as if they weren't even trying. In fact they won with such ridiculous ease and seemingly with so little effort that they could have doubled their 15 goal winning margin if the Blues had really tried. It wasn't that Carlton lairised. No sir. They played 100 minutes of solid football. It's just that they didn't strain themselves any more than was absolutely necessary. Although the result was never in doubt this game will have a big bearing on Carlton's finals build-up. They have now discovered that Greg Kennedy is everything they believed he was. His effort of 8.4 from full-forward has solved any worries at Carlton that they might have had to look for s new full-forward for the finals. He was brilliantly backed up by centre half-forward Robert Walls and between them they comprise the key to the Blues attack. North battled hard and surprisngly took Carlton apart in the ruck duels. But here Carlton gave North a lesson in versatility. The Blues small men roved brilliantly to this losing ruck and maintained Carlton's control of the packs. - Phillip Burford; Inside Football. 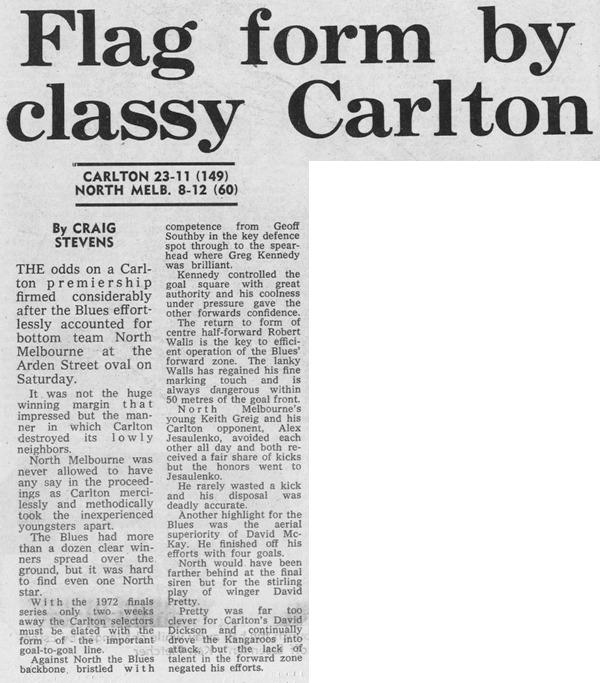 1970 Grand Final - Players line up before the start of the game.