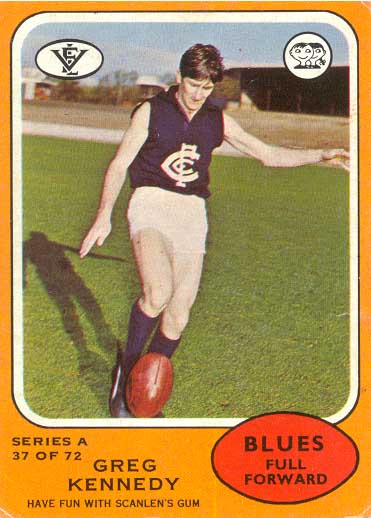 
Greg Kennedy was a rangy, high-leaping full-forward from Eaglehawk (via Wycheproof), whose brilliant debut season showed why he was courted by Carlton for five years before he arrived. But like so many others, his career was blighted by injury, and his career at Princes Park was another example of unrealised potential.

Bendigo League powerhouse Eaglehawk has been fertile ground for Carlton over the years, with Ollie Grieve, Rod Ashman and Des English (as well as Kennedy) among the stars to have graduated from the Two Blues to the Navy Blues. In Kennedy’s case, he was first approached by Carlton in the late sixties, when the teenager’s regular bags of goals for Eaglehawk began making football headlines throughout the region.

A fast-leading, athletic forward with safe hands, he was equally adept at jumping over opponents for his marks, and his kicking for goal was often deadly. The Blues were determined to get him to Princes Park, and kept up the chase. Eventually, we got our man when Greg was added to a strong Carlton squad in 1972. Enjoying silver service ball delivery from the likes of Trevor Keogh, Barry Armstrong and Syd Jackson, he had a stellar year.

Blues supporters were licking their lips after round 21, when Kennedy played a blinder against Hawthorn. Marking everything that came his way, he dominated the game to kick 12.3 in Carlton’s 68 point demolition of the Hawks. Only the great Horrie Clover has ever done better for Carlton, with 13 goals in a game. Kennedy’s season tally of 79 goals won him the club goal-kicking award, and Carlton were minor premiers by two points over Richmond.

The ‘72 finals were a triumph for Carlton, but a disappointment for Kennedy. A draw with Richmond in the second Semi Final, followed by defeat in the replay and an emphatic, rebounding win over St Kilda in the Preliminary Final set up a Carlton-Richmond decider. But after tapering off in the finals, and just one goal against St Kilda, Kennedy was left out of the Grand Final team. That decision was justified by a famous victory. Carlton went on a rampage in the highest-scoring Grand Final in VFL/AFL history. The Blues kicked 28.9.(177) to Richmond’s 22.18.(150) - and the Tigers only got that close because Carlton coasted in the last quarter.

Many young players suffer from ‘second year blues’, and Kennedy was another example. From a high of 76 goals in 1972, Greg's output declined to only 30 majors from 11 games in 1973, not helped by the effects of a debilitating back injury suffered early in the season. Carlton battled through another tough final series to again meet Richmond for the flag, only for Kennedy to be disappointed for the second year running when Craig Davis replaced him at full-forward in the Grand Final team. Kennedy himself had this to say about about his career many years afterward:

"Unfortunately, I injured my back the following season (1973) and it forced me to miss all of 1974. Against advice, I came back in 1975, but in the end I retired with 143 goals in 48 matches. That's an average of three goals a game, so I am pretty pleased with that. And I noticed that my name is still in the Football Record for 12 goals for the Blues - only Horrie Clover with 13 has kicked more in a game. I was a carpet layer all my life, even during my footy days. I spent 32 years on my knees. So it was hardly surprising that I needed new hips. When I couldn't go back to carpet laying, I became a courier."
Article by Rod Nicholson for the Sunday Herald Sun Sports' section March 29, 2009 page 32

Kennedy indeed returned for pre-season training in 1975 but couldn’t recapture his enthusiasm or his form. At the end of that year, he was eventually delisted and returned to Bendigo.

Kennedy wore No.4 for a short period during the 1972 season, he also played reserve grade footy for the Blues in 1967 and wore guernsey No. 50.