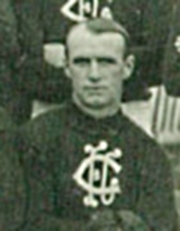 Richard ‘Dick’ Moran was a Hotham boy. Born and raised in the inner-Melbourne suburb, he went to school in the area and grew up to become a star rover for their VFA team; North Melbourne.

In 1912, VFL heavyweights Carlton came calling at the Moran family home. Striving to boost their following division, the Blues offered 25 year-old Moran an opportunity to test himself at the highest level of his chosen sport, while securing his future with significantly better match payments. Richard did accept, but told the Carlton recruiters that he didn't want to leave North Melbourne in the lurch, and would join Carlton later in the season. He duly kept his word, and donned the navy blue guernsey for his first match for his new club against South Melbourne at Princes Park in August. Sharing the roving duties with Viv Valentine, he was influential in Carlton’s 18-point win, before settling into the side to be a driving force in our run to the finals. The Football Record reported on Moran's first game: "The man who recommended Moran for inclusion in the Carlton team is a good judge of a 'bailer. The North Melbournite made a brilliant first appearance in the colours against South Melbourne. He is a game, brainy and nippy forward, and scored first and last goals for the winners."

An emphatic Semi-Final victory over Geelong booked the Blues a place in the 1912 Preliminary Final against Essendon, but then luck went missing when it was most needed. Although Moran was a standout in defeat for the Blues, with two clever goals and match-long creativity, Essendon snatched victory by four points.

Carlton faded to sixth on the ladder in 1913, while Moran carried his form through to his second season. Playing mainly as a lively half-forward flanker, he missed only one game all year, and booted 18 goals. Then he stunned the Blues at season’s end, by announcing that he intended to leave Princes Park and return to the Shinboners. In those days before written contracts there was little that the Blues could do but to wish their consistent rover all the best, and assure him that he was welcome back any time he cared to reconsider. Sadly, that didn’t happen.

In August 1914, Dick was one of the very first Australians to volunteer for active service when Great Britain and her dominions declared war on Germany. Given regimental number 19, Moran was assigned to the 6th Battalion, and sailed for the Middle East in October. Shortly after arriving in Egypt however, he was struck down by a virulent type of virus known as Spanish Influenza. Thousands of soldiers and civilians on both sides died from its effects, while many others suffered long-term disability. Dick himself spent months in hospital, and was eventually assessed as unfit for further service. He was repatriated home to Australia in September 1915, to be honourably discharged soon afterward.

It appears that Moran suffered the after-effects of his illness for the rest of his life - because he passed away at the tragically young age of 53, in October, 1940.

The Melbourne Punch 27 August 1914 (p45) writing about the North Melbourne vs Essendon "A" VFA match mentions,
"Dingo" Moran made a brave effort to overhaul Clarke, the Essendon goal getter, the former's quinetette bringing him to within one of Clarke, whose total is forty-six." "Moran (late of Carlton) and Miles are always amongst the sharpshooters."

1976 - Upgrade of Grandstands at Princes Park.